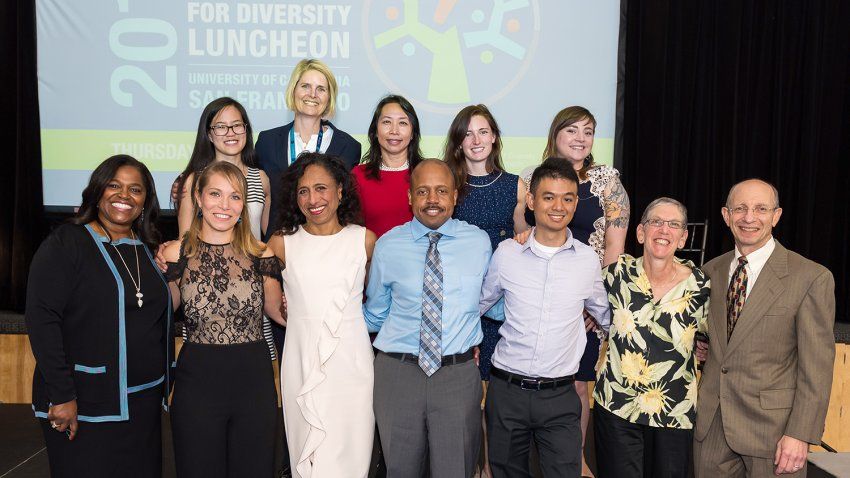 Ten awardees were honored with 2018 UC San Francisco Chancellor Diversity Awards for their innovative efforts to advance diversity, equity and inclusion in their fields and in the wider community.

The UCSF Office of Diversity and Outreach and Executive Vice Chancellor and Provost Daniel Lowenstein, MD, recognized the recipients at a luncheon in their honor on Oct. 25. 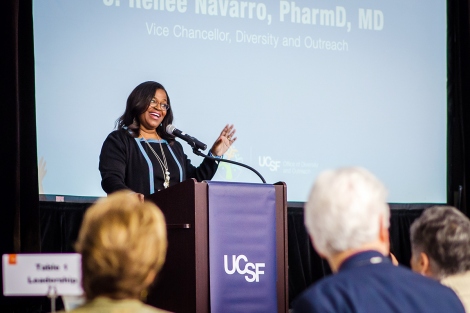 During their introductory remarks, both Lowenstein and UCSF Vice Chancellor of Diversity and Outreach Renee Navarro, MD, PharmD, noted the urgent need to redouble efforts to achieve equity and inclusion given national and local current events.

“In the midst of all that’s going on across the nation, I think it’s especially important that we take this time to celebrate the accomplishments of members of our community who go above and beyond their normal responsibilities to make UCSF a place that truly welcomes all,” said Navarro.

The Diversity Awards celebration was one of numerous events held during October, which is Diversity and Inclusion Month at UCSF. Faculty and staff honorees, as well as student, resident, and postdoctoral scholar recipients, were named in each of four award categories – Advancement of Women; Disability Service; Dr. Martin Luther King Jr. Leadership; and LGBTQI Leadership.

Chancellor Award for Advancement of Women 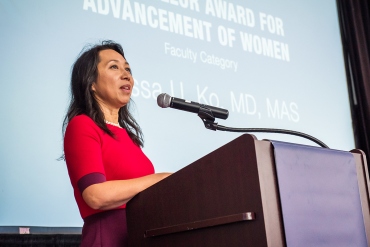 Nerissa Ko, MD, MAS, is a professor and vice chair of Diversity in the Department of Neurology; she also serves on the University’s Committee on the Status of Women. Ko has consistently advocated for women at UCSF, leading efforts to achieve pay equity for women faculty and working to recruit and retain talented women faculty members and trainees, among many other projects. She was instrumental in developing the UCSF lactation program as well as the Faculty Family Friendly Initiative, which guarantees 12 weeks paid childbirth leave. A strong voice for women in medicine, she is frequently invited to speak on diversity and gender quality at national and international Neurology conferences. 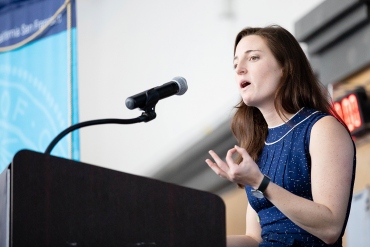 Sophia Levan is a PhD student in the Biomedical Sciences program, where she is known for her commitment to equity and inclusion. Three years ago, Levan cofounded the Medical Scientist Training Program Women’s group, and has since coordinated the group’s programming and expanded its scope and impact to include women at all levels of their training. As president of UCSF's Women in Life Sciences (WiLS) group this past year, Levan worked to include activism and intersectionality as central goals of the organization, collaborated with the Science Policy group to create a Women in Science Policy series, and maintained all the traditional WiLS programming, which this year alone included 19 events focused on diversity, inclusion and the advancement of women. 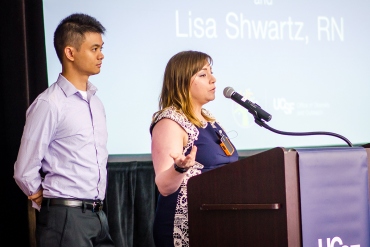 Laurence Henson, a School of Medicine student, and Lisa Shwartz, a student in the School of Nursing, have devoted themselves to serving the UCSF community living with chronic illness and disability, and educating students about disability as a dimension of diversity. Henson and Shwartz collaborated to create an inter-professional elective that gives students experience with individuals with disabilities who work as advocates, teachers, and providers. Together they designed a curriculum of topics to be covered, including “Race and Disability,” “Disability and Sexuality,” “LGBTQI and Disability,” and “Providing Quality Care to Patients with Disabilities.” Schwartz designed the syllabus and curriculum for the course to be as accessible to learners with disabilities as possible. The class has been widely lauded as excellent – and overdue – by students across disciplines. 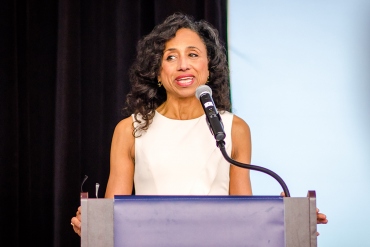 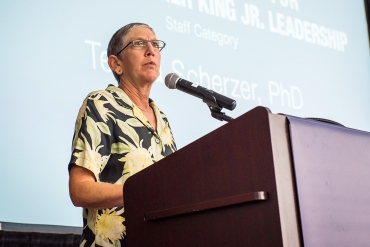 Teresa Scherzer, PhD, is the Academic Programs Evaluator for the School of Nursing. Scherzer is honored for her enduring efforts to develop and support diversity and inclusion in UCSF organizations – notably as co-chair of the School of Nursing Diversity in Action (DIVA) Committee and as a founding member of the staff association Stronger Together: Resources for Inclusion, Diversity, & Excellence (STRIDE). She has brought change to the School of Nursing through the incorporation of diversity and inclusion into course evaluations, the school’s climate study, and the implementation of the DIVA process – now required training for all faculty. Moreover, the DIVA model she has promoted is being adapted and adopted in other schools at UCSF and in other nursing schools across the country. 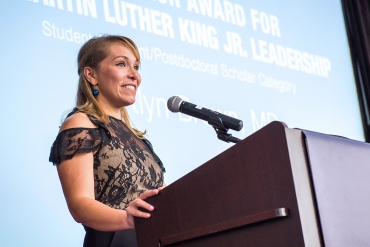 Cortlyn Brown, MD, is a resident physician in the Department of Emergency Medicine (EM) and co-director of the UCSF Emergency Medicine Diversity Program. Noted for her longstanding dedication to increasing opportunities for a diverse workforce in medicine, Brown spearheaded the introduction of a new cultural humility curriculum into the EM intern curriculum. This curriculum has since been introduced at EM departments at other institutions. Brown has also organized and supported several mentorship events between the UCSF Student National Medical Association, UCSF Latino Medical Student Association and UCSF EM residents as well as several skills sessions for Underrepresented in Medicine high school students. 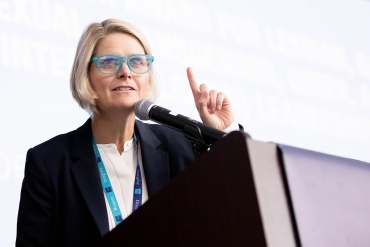 Amber Fitzsimmons, DPTSc, PT, is an associate professor and the lead faculty for diversity and inclusive practice in the Department of Physical Therapy and Rehabilitation Science. Among her many LGBTQI advocacy and outreach efforts, Fitzsimmons developed an elective course on social responsibility that was expanded to a core course in the school’s curriculum: Care, Accountability, Responsibility and Excellence (CARE). As a result of the CARE course, two students teamed up with Fitzsimmons and another faculty member to investigate the presence or absence of LGBTQI course content in physical therapy curricula across the country. This has led to a national discussion about the need to include LGBTQI as a cultural competency in physical therapy education curricula.

Marguerita Lightfoot, PhD, serves as a professor in the School of Medicine and director of the Center for AIDS Prevention Studies. Lightfoot is committed to bridging the gap between science and the community by focusing on reducing health disparities through HIV/STI prevention and performing community collaborative and translational research. As division chief and a staunch advocate for diversity, she has tripled the number of Underrepresented in Medicine faculty, two of whom identify as LGBTQI. She is also known as an effective mentor who has built a welcoming and inclusive environment that is unmatched in opportunity and support. In her work, Lightfoot has embraced the LGBTQI community from all perspectives – research, mentoring, sponsorship, allyship – and across all levels – youth at risk, community partners and faculty. (Note: Marguerita Lightfoot was unnable to attend the luncheon, and her award was accepted by Wilson Vincent, PhD, MPH.) 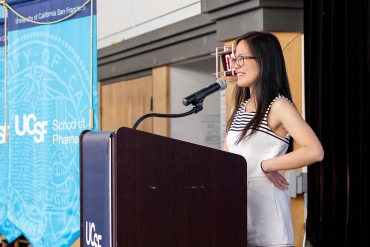 Elaine Hsiang has a passion for working with the LGBTQI community. A student in the School of Medicine and a member of the UCSF Committee on LGBT Issues, Hsiang balances her clinical rotations, competency exams, and preparation for her first medical licensing exam with service and advocacy. Among her accomplishments, Hsiang served on the planning committee for the 2018 UCSF LGBTQI Health Forum, a one-day, 10-hour, student-organized event that provides attendees the opportunity to learn more about the health care needs of the LGBTQI community. She has also founded the UCSF Undergraduate Queer Institute, a recruitment and leadership advancement initiative for LGBTQI pre-health undergraduate and post-baccalaureate students hoping to enter the health and science professions.

“[Hsiang’s] work has left a huge imprint on the lives of many LGBTQI people, and will continue to do so,” said Peter Ureste, MD.

Learn more about the awardees and watch the nomination videos »