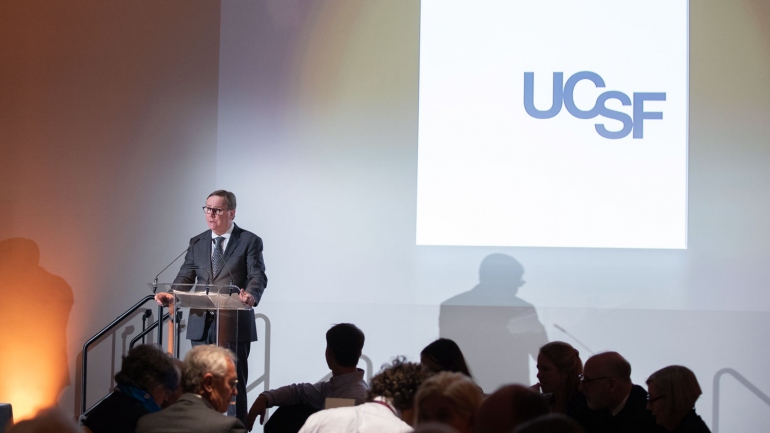 The 2018 UCSF Medals were given to health care activist Byllye Avery; longtime UCSF leader and health policy scholar A. Eugene Washington, MD, MSc; and the founding fathers of computational chemistry Irwin “Tack” Kuntz, PhD, Robert Langridge, PhD, and the late Peter Kollman, PhD. The awardees were celebrated at a ceremony on Thursday at the Mission Bay Conference Center.

“These awardees exemplify the mission and values that drive UCSF,” Chancellor Sam Hawgood, MBBS, said. “Each of these individuals has made an indelible mark in their fields, inspiring us to challenge the status quo and to push the boundaries of what’s possible in advancing human health.”

The granting of UCSF Medals is an annual tradition that began in 1975 under the leadership of former Chancellor Francis Sooy, MD. Equivalent to an honorary degree, the medal recognizes individuals who have made outstanding personal contributions in areas that align with UCSF’s mission areas. Recipients are formally nominated and then selected by a distinguished committee of university members.

Byllye Avery was honored for her decades-long work as a champion of health equity, focused on improving the health and wellness of black women through self-help groups and advocacy networks. 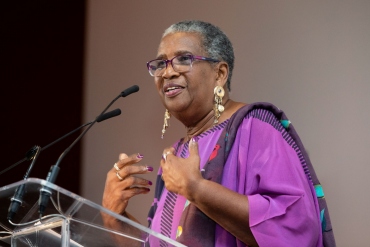 Avery is best known as the founder of the National Black Women’s Health Project in Atlanta, the first organization to bring attention to black women’s health. The movement began in 1983, when Avery spearheaded the First National Conference on Black Women’s Health Issues at Spelman College, which drew nearly 2,000 attendees to begin a dialogue around previously taboo subjects of sex and reproductive rights. The organization’s signature self-help groups provided a safe environment for women to break the “conspiracy of silence” and talk openly about how psychosocial issues affect their health and well-being.

Avery also founded the Gainesville (Florida) Women’s Health Center in 1974; Birthplace, an alternative birthing center in Gainesville; the Avery Institute for Social Change; and co-founded Raising Women’s Voices for the Healthcare We Need.

The recipient of a 1989 MacArthur Fellowship for Social Contribution, Avery has written and lectured widely about how race, sex and class affect women’s empowerment in the women’s health movement. She received the National Academy of Medicine's Gustav O. Lienhard Award for the Advancement of Health Care in 1994, and the President’s Citation by the American Public Health Association in 1995.

"Your deep insight into the burdens at the intersection of racism and sexism informs our effort to make UCSF the most diverse, equitable and inclusive institution that we can make it," Hawgood said in his introduction of Avery at the ceremony. "I see your inspirational influence on work being done daily at UCSF to improve the lives and health of black women everywhere."

Washington graduated from the UCSF School of Medicine in 1976, and returned in 1989 as a professor of gynecology and epidemiology. In a career at UCSF that spanned 20 years, he ascended the academic ranks and became one of UCSF’s most respected and beloved leaders, serving as chair of UCSF Department of Obstetrics, Gynecology and Reproductive Sciences, before becoming executive vice chancellor and provost of the University. 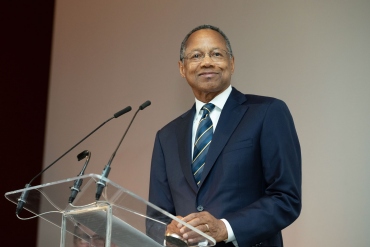 During his time at UCSF, Washington developed a deep appreciation for the role academic health systems play in communities at large. In each of his leadership posts, he has strived to achieve impact on a broader scale by envisioning institutions as cohesive wholes working toward a greater good.

As executive vice chancellor and provost, Washington’s ability to bring people together was instrumental in shepherding the first-ever University-wide strategic plan and leading the implementation of a 10-point diversity initiative. Washington won many honors and awards at UCSF, including the School of Medicine 1999 Alumnus of the Year and the UCSF’s Dr. Martin Luther King, Jr. Award, recognizing his extraordinary efforts to promote diversity.

For more than 25 years, Washington has stood at the helm of some of the nation’s most prominent academic health institutions. He is currently chancellor for health affairs at Duke University, and president and CEO of the Duke Health System. From 2010 to 2015, he served as vice chancellor of health sciences at UCLA, dean of the UCLA David Geffen School of Medicine, and CEO of the UCLA Health System.

Through his work as a clinical investigator, Washington has been a national leader in assessing medical technologies, developing clinical practice guidelines and establishing disease prevention policies, particularly for women’s health.

"Gene has been mentor and role model for me throughout my career, showing me by example how effective leadership, humility, and integrity go hand in hand," Hawgood said in his remarks. "More than anyone I know, Gene has the natural ability to bring people together and to work on projects for the common good."

Peter Andrew Kollman, PhD, Irwin “Tack” Kuntz, PhD, and Robert Langridge, PhD, were honored jointly for their collaborative spirit, passion for discovery and pioneering research in the field of pharmaceutical science. Kollman received the award posthumously, having passed away in 2001.

Together, the UCSF School of Pharmacy professors emeriti are widely regarded as the founding fathers of computational chemistry, emblazoning UCSF as a leader in the field and paving the way for decades of groundbreaking discovery.

The three joined UCSF in the 1970s, igniting a uniquely collaborative community in the School of Pharmacy. It was a time when computers had advanced to the point of being powerful enough to simulate the interactions of atoms and molecules with one another, opening the door to a deeper understanding of how physical structure affects biological function. Combining their individual areas of expertise, they developed approaches to model the protein targets of drugs, marrying computing to drug discovery and to a principled understanding of biochemistry.

"Our medalists are a true triumvirate of scientists who came to UCSF at a special time in our university’s history," Hawgood said in his remarks, "a time that became ground zero for the field of computation biology, now a central part of life for almost every scientist in the life sciences." 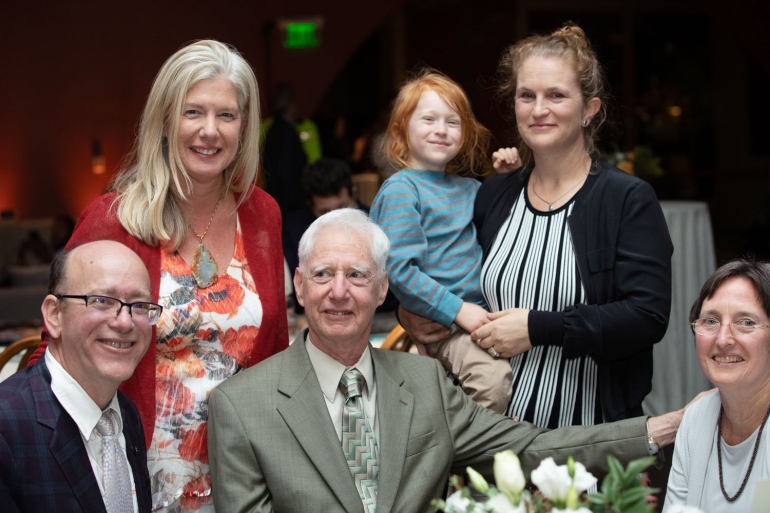 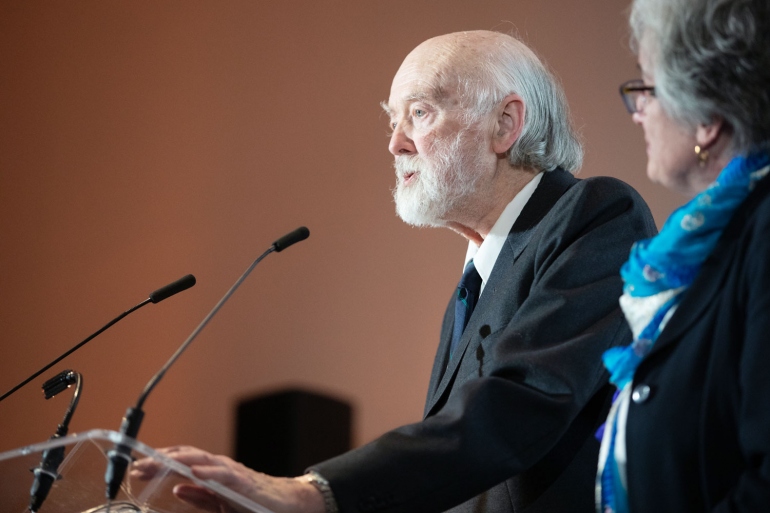 Collectively, they mentored more than 170 PhD students and postdoctoral fellows, hosted dozens of visiting scholars to UCSF, and disseminated their research results worldwide through publications and invited lectures. Kollman was one of the most cited chemists in the world in his era, having published more than 400 journal articles prior to his death. Both he and Kuntz were individual recipients of the American Chemical Society’s Computers in Chemistry Award.

Langridge founded and directed the UCSF Computer Graphics Laboratory and was elected as a fellow of the American Association for the Advancement of Science in 1989 and to the Institute of Medicine in 1990. He retired from UCSF in 1994, followed by Kuntz in 2003.