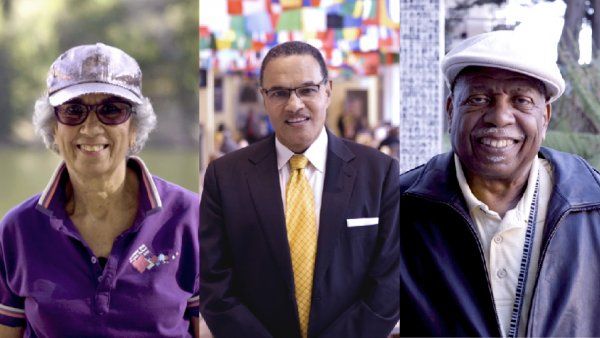 UC San Francisco has awarded UCSF Medals to three national leaders, all of whom have advanced diversity and inclusion, including through mentorship that has helped to place more underrepresented voices in the sciences.

“We celebrate our medalists during a public health crisis of historic magnitude and during a national reckoning of racial injustice that has been precipitated by the tragic murders of Black Americans by our police,” said Chancellor Sam Hawgood, MBBS, during his opening remarks of the virtual event held Friday.

The medals event highlighted videos about each of the awardees, followed by a roundtable discussion that touched on race and diversity, the role of underrepresented groups in medicine and science, the role of universities in advancing equality, and the importance of mentoring.

“Today we pay tribute to three remarkable individuals who have dedicated their lives to addressing discrimination and to bringing equality and equal opportunity to all. I know their stories will inspire you as much as they have inspired me,” Hawgood said.

Since 1975, the University has awarded UCSF Medals to individuals whose life work has consisted with the public mission and values of UCSF. It is the equivalent of an honorary degree.

Freeman Hrabowski III, PhD, was honored for his long-term leadership of the University of Maryland, Baltimore County (UMBC), and for his dedication to attracting minority students to the fields science and mathematics.

Over three decades, Hrabowski has guided UMBC to become an institute of higher learning that has educated more Blacks who’ve gone on to complete MD-PhDs than any university in the history of the country. Hrabowski counts among his former students U.S. Surgeon General Jerome Adams, MD, MPH.

“What we've been doing for decades now, is identifying students from a range of backgrounds of every race and different income levels,” said Hrabowski, “and saying, ‘We want to work with you to help you reach your goals, and reaching your goals should not be about simply surviving.’”

Hrabowski serves as a consultant to the National Academies of Science, the National Institutes of Health, and has been honored by numerous organizations, including honorary degrees from more than 40 institutions. Of his many accomplishments, one of his greatest is the co-founding of the Meyerhoff Scholars Programs in 1988. The program, created with philanthropist Robert Meyerhoff, helps students, and especially minority students, pursue advanced degrees in the sciences. The program’s success has turned it into a model replicated nationally.

“I think what motivates Freeman to do what he does, what he does very well for many, many years, is his very basic belief in equity for all,” said Katherine Cole, Vice Provost and Dean of Undergraduate Academic Affairs at UMBC. “UMBC is Freeman’s body of work, and it is a beautiful university with a great culture of caring and support to all. No one is left behind. No one is excluded.”

Hrabowski grew up in Birmingham in the 1950s. From an early age, he was immersed in the Civil Rights Movement; at age 12, he marched with Martin Luther King Jr. – and was jailed for it.

A self-proclaimed “nerdy math kid,” Hrabowski recognized early on that Blacks were underrepresented in the sciences; it seemed liked there was only George Washington Carver, he said. The imbalance weighed on him and stoked his desire to bring more minorities into the sciences.

He studied mathematics at the Hampton Institute, earned his master’s degree in mathematics and doctorate in higher education administration and statistics from the University of Illinois at Urbana-Champaign. Since 1992, he has served as president of UMBC, where he pushed to develop its science and math curricula into top-tier programs that open opportunities for minorities.

Afaf Meleis, PhD, DrPS(hon), FAAN, LL, was honored for her work as a mentor to hundreds of nursing students and faculty around the world, as well as for the development of a nursing theory for assisting patients with healthy transitions.

Meleis grew up in Alexandria, Egypt. Her mother was a nurse and educator who championed nursing schools throughout the Middle East. Meleis studied nursing at the University of Alexandria, and then moved to Los Angeles, where she earned a Master’s and Doctorate in nursing at UCLA.

She then came to UCSF, where she served as professor of nursing for 34 years. Among her accomplishments was establishing a PhD for nursing in 1984, a rarity in education at the time. She also wrote an award-winning book on nursing practice and history. In 2002, she became Dean of the University of Pennsylvania’s School of Nursing. Now, Meleis is Dean Emeritus and a professor of nursing and sociology at Penn, and a professor emeritus at UCSF.

Her legacy stems not only from educating about nursing, but changing the way it’s perceived and practiced.

“The history of nursing has been a history of being oppressed and working and being exploited in the health care system,” she said. “That exploitation helped the health care system, but it was not helpful for the nurses, and it was not helpful for the patients and the clients we provide the care for. I really wanted to make sure that nurses have the same opportunities and the same options, and that it is a valued profession – but it wasn’t only for the sake of nurses, but it’s for the sake of providing quality care.”

Meleis has mentored nurses in Egypt, Sweden, Thailand, Korea, and other countries, with the goal of evolving models of care around the world. “Changing the perception about nursing happens progressively, and incrementally,” she said.

Over her long and continuing career, Meleis’ mission has been to improve conditions for nurses, so they in turn can provide better care.

John A. Watson, PhD, was honored for more than four decades of leadership, research, and mentorship at UCSF’s School of Medicine, as well as for his work recruiting a more diverse body of students and faculty.

Watson came to UCSF in 1969 as assistant dean for Student Affairs and assistant professor of Biochemistry and Biophysics. When he became Director of Admissions at the UCSF School of Medicine, he rethought the entire admissions process with an eye to expanding the diversity of the student body. His approach, which used a more holistic approach to the strengths of the students, has been adopted by most medical schools across the country.

“Dr. Watson had been at the very forefront of trying to improve diversity, equity, inclusion, and medical education,” said Talmadge E. King Jr., dean of the UCSF School of Medicine and Vice Chancellor for Clinical Affairs. “He said that there are more things you have to look at to decide who would succeed and who would not succeed beyond just grades or scores on aptitude tests. He thought that people should look at the whole person. And that whole holistic approach to finding people who will succeed in science and in medical school was at that time quite novel. Now we think of it as the way we should look at admissions. So it was his work that really put that on the map in a national way.”

In 2015, UCSF created a fund to create faculty diversity and inclusion. Each year, the school’s John A. Watson Faculty Scholars represent Watson’s work bringing underrepresented minorities into the sciences, and on Watson’s work as a mentor to generations of medical students.

“The most rewarding thing about being at UCSF in terms of the mentoring and being engaged in inclusiveness was the recognition that in so many individuals lives, you were at the right juncture point. You made a difference,” Watson said. “Just being there to help, and to do it selfishly. You’re not looking for commendations you're not looking. ... You do it because you have empathy, you have sensitivity, and you know you've helped.”

Watson grew up on the South Side of Chicago. His father, he said, told him he was born with two strikes against him: “you’re black and you’re poor.” He understood that he’d have to work harder to get ahead, “and not be distracted or deterred by the circumstances.”

Watson was interested in the sciences from childhood, when his chemistry sets and even DuPont commercials on TV suggested to him that one really could make a better world through chemistry. His scientific interests led him to an institute that studied baking. There, he discovered an interest in biochemistry that shaped his scientific career.