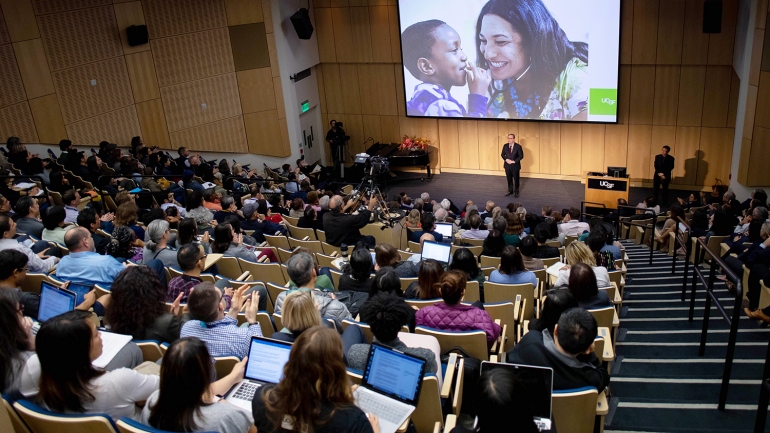 UC San Francisco has a “social and moral responsibility” to get involved in its communities by addressing health disparities, enabling access to science education and tackling homelessness, among other ways, Chancellor Sam Hawgood, MBBS, said in the 2018 State of the University address.

In his fifth annual address, Hawgood focused on the deep connections the University has to the Bay Area and its people. He also began by calling attention to UCSF’s role in the national community, mourning recent violent attacks in Pennsylvania and Kentucky against religious and racial minorities.

STATE OF THE UNIVERSITY 2018

Watch the full State of the University address from Oct. 30, including the chancellor’s speech from Cole Hall and a presentation from UCSF Benioff Children’s Hospital Oakland.

“I want to acknowledge the pain, sorrow, and outrage that many of you feel here today and when any one of these heinous events occur,” he said. “Caring and healing are two words in our mission statement. We generally mean them to represent our work with one patient and one family at a time, but caring and healing can also be caring for our own family at UCSF and the communities we serve.”

Hawgood’s address, titled “Commitment to the Community,” underscored UCSF’s longstanding commitment to social justice and highlighted innovative programs that are improving the health and well-being of the most vulnerable populations. The chancellor also pointed to a year of significant growth for UCSF – financially, physically and in its impact – and acknowledged the supportive community that helped make it possible.

“Throughout its history, UCSF has enjoyed tremendous support from the communities in which we are embedded, from our elected officials, our amazing volunteers and supporters, our neighbors and the public more generally. This ongoing support is central to our growth and success in the future,” Hawgood said to the crowd in Cole Hall on the Parnassus campus. The speech was simulcast to Mission Bay, UCSF Fresno as well as UCSF Benioff Children’s Hospital Oakland.

“As we look to the future, it is clear that UCSF – as one of the Bay Area’s founding institutions – is positioned well to put our considerable resources, both human and fiscal, to work on making life better for families, neighbors, patients and future generations.”

Hawgood began by recapping the many institutional achievements and milestones that reflected UCSF’s growing impact over the past year: Among them, UCSF Medical Center again ranked the best hospital in California, and UCSF received more National Institutes of Health research funding than any other public institution.

This has resulted in a strong financial position for UCSF: Last fiscal year, total revenues supporting core activities increased nearly 70 percent to just over $7 billion, compared to $4 billion five years ago, he reported. 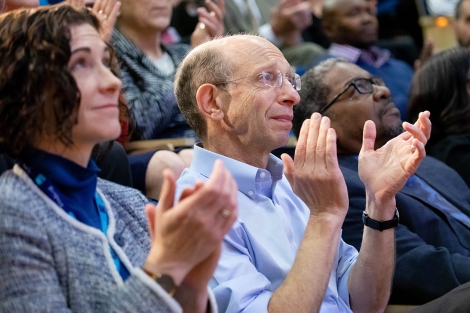 Theresa O’Brien (from left), PhD, associate chancellor; Daniel Lowenstein, MD, Executive Vice Chancellor and Provost; and Talmadge E. King Jr., MD, Dean of the School of Medicine, react after watching a video at the State of the University address. Photo by Susan Merrell

More than half of that comes from patient revenue, with growing demand for UCSF Health services. In the same period, UCSF provided $384 million in undercompensated care, including care for uninsured patients and underreimbursed care to Medi-Cal patients. Research contracts and grants also have increased and accounted for about 30 percent of UCSF’s revenue.

“By many measures – our ranking among the nation’s top hospitals, the grants awarded for our scientific research, the quality of our learners, and our firm financial footing, put UCSF as one of the premier health science universities in the world,” he said.

Meanwhile, the schools have reimagined and expanded programs to better support trainees and students:

Hawgood also reported progress with creating a more diverse and inclusive environment. For instance, through the work of the School of Medicine’s Differences Matter initiative, 40 percent of its incoming class self-identified as underrepresented in medicine, the highest percentage in UCSF history.

As UCSF works on the next strategic plan in diversity, equity and inclusion, the chancellor acknowledged there’s still “much more work to do.” The last staff engagement survey identified that black and Hispanic employees feel less engaged and less supported in their work than their white and Asian co-workers, and UCSF is working on an action plan to address this, he said.

Since the beginning of the quiet phase of the campaign in 2014, UCSF: The Campaign has raised nearly $4.2 billion. Of that, $1.2 billion was raised in gifts, grants and pledges just last year: “We are one of only a very small handful of universities that have ever reached the billion-dollar threshold in a single year,” he said. 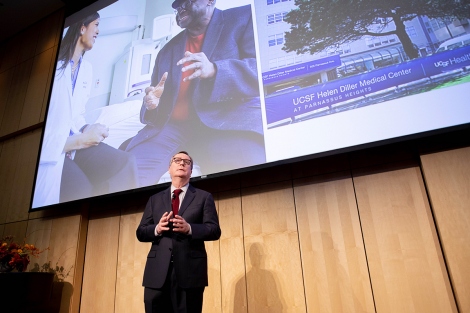 Chancellor Sam Hawgood speaks about the $500 million commitment from the Helen Diller Foundation that will support a new hospital at Parnassus Heights. Photo by Susan Merrell

“While this success underscores the scale of bold ideas that are inspiring our donors, it also tells a story about our community,” he said. “More and more faculty members have been approaching me – not as individuals with their own needs, but rather as teams with a well-thought-out collaborative vision about how they plan to work together to tackle even larger, even more complex problems.”

The funding for the campaign will go to support myriad programs and projects across UCSF, including more than $1 billion for faculty and students, which is more funding than any other area of the campaign. One gift that Hawgood said he is particularly proud of is a donation, made by an alumna of the University’s PhD program, to support the recruitment and retention of women in science.

In addition, Hawgood spotlighted three major recent gifts, including the funding of the UCSF Bakar ImmunoX Initiative, which will drive a team approach to analyzing the role of the immune system across diseases; a $20 million gift to establish the new UCSF Dolby Family Center for Mood Disorders that will allow ambitious precision-medicine treatments and diagnostic tools for severe mood disorders; and the $500 million commitment from the Helen Diller Foundation that will support a new, world-class hospital at Parnassus Heights.

The new hospital is one part of an inclusive planning process for Parnassus Heights, and the chancellor said UCSF expects to share “a roadmap to sustain our mission of conducting top-tier research, clinical care, and education here on Parnassus Heights next year.”

UCSF’s work in the community dates back more than 100 years, Hawgood said, pointing to the work of the physicians and trainees who rushed to treat victims of the 1906 earthquake. That commitment has carried through the century with UCSF programs that include health and educational outreach.

Hawgood called out three longstanding community programs: the UCSF School of Dentistry’s Community Dental Clinic, a student-run operation that has provided free dental services to the city’s homeless and low-income residents for 25 years; the UCSF Alliance Health Project, formed in the early years of the AIDS epidemic and now provides mental health and substance abuse services to more than 3,500 people each year; and the Center for Science Education and Outreach, which has supported science education for tens of thousands of public school students over 20 years.

To spotlight some of the forward-thinking work to address social injustices in the community, Hawgood invited two guest speakers, Dayna Long, MD, medical director for the Department of Community Health and Engagement at UCSF Benioff Children’s Hospital Oakland, and Margot Kushel, MD, the new director of the UCSF Center for Vulnerable Populations. 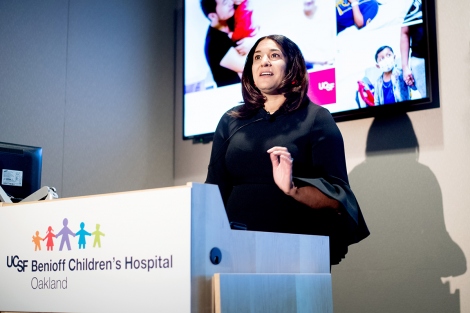 Dayna Long, MD, speaks from the UCSF Benioff Children’s Hospital Oakland as a part of the 2018 State of the University address. Long spoke about her work to address toxic stress in children. Photo by Noah Berger

Speaking from UCSF Benioff Children’s Hospital Oakland, Long described the huge disparities in health outcomes for children of color, children of immigrants and those who experience poverty, disability, discrimination and significant trauma.

“These disparities are not simply a function of access to health care. It is not genes or germs that primarily determine our well-being,” she said. “The biggest factors are our social and economic circumstances – conditions that have not traditionally been addressed by the health care system. At UCSF, we’re challenging this traditional paradigm and are changing our approach to the practice of medicine.”

Toxic stress, which is caused by exposure to serious or prolonged trauma like sexual assault, separation from caregivers, witnessing violence or being homeless, can affect a child’s DNA, brain development, immune system, and contribute to health problems such as depression and diabetes. “These challenges are examples of health inequities – the systemic, ingrained and unjust barriers that keep entire segments of children from being well,” she said.

The experts at the UCSF Child Health Equity Institute are helping advance science-based solutions for health inequity by testing screening tools, identifying biologic markers of stress, developing new mental health interventions, and training future leaders from diversity backgrounds. “Today, we challenge ourselves to be better, we challenge ourselves to treat every child like our own,” she said. 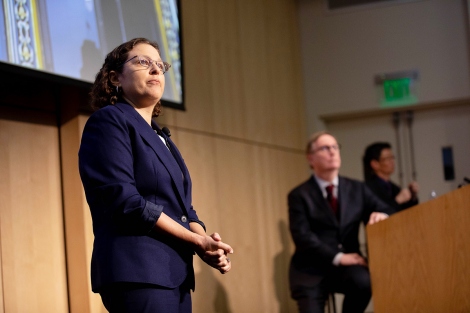 Margot Kushel, MD, speaks at Cole Hall during the State of the University address. Kushel talked about her work to reduce homelessness. Photo by Susan Merrell

Kushel described seeing firsthand the devastating effects of homelessness on patients she treated at Zuckerberg San Francisco General Hospital. The work over the past 20 years for Kushel stems from her experience treating patients at ZSFG and then noticing that days later the same patients would return even sicker than before. “I knew that we could do better,” she said.

Research has shown that homelessness is among the most powerful predictors of health outcomes, she said, and that “for people who are homeless, there is no medicine as powerful as housing.”

Kushel highlighted the work of the Emergency Department Social Medicine consult service at ZSFG. Together, teams of social workers, care coordination nurses, pharmacists, patient care coordinators and improvement specialists help connect patients with services in the community. This year alone, the service has helped 1,000 patients with complex medical and social needs, prevented more than 230 hospitalizations, and enabled many patients to exit homelessness.

“Those of us who are health care providers, scientists, students and scholars have a responsibility to amplify the voices of the patients we serve – to involve ourselves in public discourse and to seek more just policies,” Kushel said.

“At a time when the principles of scientific practice and the foundations of scientific knowledge are under assault, it is more important than ever that all of us stand up for the crucial role of science in society,” she added. “But, we also need to step back – to allow and encourage others to speak. And we need to listen to what they are telling us.”

‘Continue to Stand Up and Speak Up’

Hawgood called on everyone at UCSF to use our collective power to continue advancing social justice.

“Unquestionably, we are living in extraordinarily challenging times,” Hawgood said in his closing. “While we as a society face complex problems at the local, national and global levels, I remain very optimistic about the contributions that UCSF, we as a community, can make to solving these problems.”

One easy action is to volunteer, Hawgood said. To make it easier to connect with opportunities in the community, UCSF has a program called UCSF Volunteers that outlines how managers and staff can work together for a common cause, strengthening their connection to one another and UCSF’s mission.

A second action is voting on Nov. 6.

“Many issues are at stake in these midterms: from protecting health care for those with pre-existing conditions to defending transgender identity,” he said. “The power of our UCSF community is more than 30,000 strong, and we can make a difference.”