She Served on UCSF's Community Advisory Group for Over 20 Years 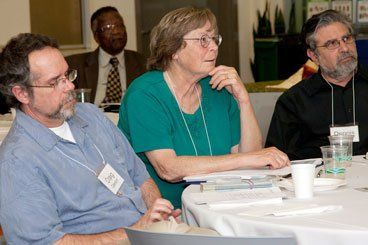 Corinne Woods (center) at a UCSF Community Advisory Group meeting in 2011 where UCSF staff presented future plans for the University.

Corinne Woods, a longtime advocate for San Francisco’s waterfront community who served on UC San Francisco’s Community Advisory Group for more than two decades, died on April 1. She was 72.

She died peacefully at her home, a beloved houseboat on Mission Creek Harbor that she shared with her husband, Peter Snider.

For four decades, Woods was a passionate and forthright voice for the community and influenced development projects across the city, including UCSF’s Mission Bay campus, the San Francisco Giants ballpark and the new Golden State Warriors arena.

“Corinne dedicated countless hours of her time to improve the San Francisco waterfront and Mission Bay for everyone who lives in the city,” said Barbara J. French, vice chancellor for strategic communications and university relations. “Not only did her tireless work help guide UCSF in our planning for the Mission Bay campus, but she had a passion for making the entire Mission Bay area a more livable and welcoming environment.”

Woods served on UCSF’s Community Advisory Group – which is made up of community leaders across the city who assist the University in planning and other issues – and her involvement stretched back to the early planning of the Mission Bay campus.

“She was an honest, intelligent, articulate spokesperson for the Mission Bay community, and we could always rely on Corinne to speak the truth to hold UCSF, the City of San Francisco, and other key Mission Bay stakeholders accountable,” said Lori Yamauchi, associate vice chancellor of Campus Planning at UCSF.

She devoted countless hours to reviewing plans, reading Environmental Impact Reports, attending meetings and public hearings, and offering thoughtful comments and critiques of the proposed campus. Her input helped make the campus and children’s hospital design more accessible to the public, including a public plaza at Fourth Street.

“Having worked with Corinne so closely over the decades, it is clear to me that Mission Bay is a much more thoughtfully planned and designed place due to her vision, deep understanding of the history of the area, fierce advocacy for her community, and pragmatism,” said Kevin Beauchamp, director of physical planning at UCSF.

“She was able to see the ‘big picture’ of Mission Bay as a whole, while paying attention to the details and nuances of UCSF’s plans,” said Yamauchi. “Most importantly, Corinne was a friend and colleague, and she will be sorely missed.”

Woods was born in Waltham, Mass., went to high school in Bethesda, Md., and attended Georgetown University. She moved to San Francisco in 1969 during the summer of love. For more than thirty years, she made a home on a houseboat in Mission Creek. “It’s a floating home,” she told San Francisco Examiner in 2014. “I love waking up and watching the pelicans and gulls squabbling at my front door and the sea lions diving for fish.”

In 1983, she joined waterfront neighbors in creating the Mission Creek Conservancy to clean up the polluted creek. Those efforts sparked her activism and a life-long dedication to volunteering with civic organizations. In addition to UCSF’s Community Advisory Group, Woods served on the Central Waterfront Advisory Group and was chair of the Mission Bay Citizens Advisory Committee.

“There are many people who strive to make San Francisco a better place to live, and not many of them get the recognition they deserve,” French said. “Corinne was one of those people, and she left a positive and lasting impact on everyone who worked and served with her.”