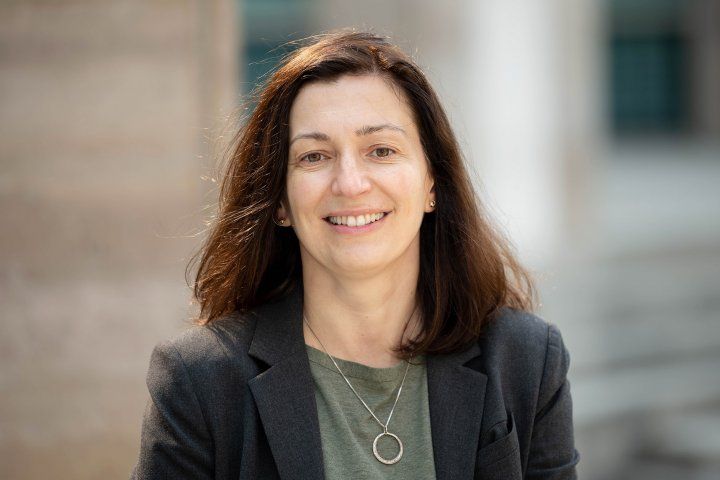 UC San Francisco chemical biologist Danica Galonić Fujimori, PhD, has been named this year’s Bowes Biomedical Investigator. The award provides unrestricted funding of $1.25 million over five years to support Fujimori’s teaching and leadership roles and advance her quest to understand life’s fundamental chemistry – research that could help solve some of the biggest challenges in health care, including cancer and antibiotic resistance.

“It’s a tremendous honor,” said Fujimori, a professor in the Department of Cellular and Molecular Pharmacology, a sought-out mentor to students, and an advocate for the advancement of minorities and women in basic science. “As a basic scientist, I’m grateful to UCSF for seeing the value in supporting fundamental discoveries that may be challenging or risky but that in the end will improve human lives.”

Fujimori studies how enzymes modify genetic material and other components of living cells. Enzymes are biological catalysts – they facilitate chemical reactions required to maintain the life and health of an organism. And their abilities are truly extraordinary: Enzymes often perform, in a single step, reactions that might take a human chemist many steps of mixing, heating, or otherwise coaxing together the right ingredients under the right conditions – if she can achieve the feat at all.

“Enzymes give us a treasure trove of amazing chemistry that is very difficult to execute,” Fujimori said. “My lab investigates this chemistry: How is it possible? How does it work? And most importantly, how can we use it to our advantage in order to stop disease?”

Take cancer, for instance. When scientists examine malignant cells, they often find that these cells generate certain enzymes in unusual forms or amounts. Fujimori’s team has zeroed in on a family of enzymes known as KDM5 demethylases, which show up in abundance in breast and prostate cancers. KDM5 enzymes are known as epigenetic regulators, meaning they control how genes are expressed.

Fujimori’s team wanted to know how KDM5 enzymes contribute to disease in cancer cells. By recreating and manipulating these enzymes in the lab, the team identified an important part of the enzymes’ structure that assists them in performing their regulatory work.

“This finding is very exciting because it gives us a target site that can be used to develop new cancer drugs,” Fujimori said. Such drugs might be able to stop KDM5 enzymes from promoting cancer growth by impairing this key target – like cutting power to a car’s ignition.

Another promising application of Fujimori’s research is in combating antibiotic resistance, a growing crisis that causes more than 35,000 deaths in the U.S. every year, according to the Centers for Disease Control and Prevention. Many of today’s antibiotics work by binding to and thereby disabling a bacterium’s ribosome, a molecular machine that makes proteins in all living cells. Many bacteria, in turn, have evolved the ability to evade these drugs by erecting small chemical obstructions in their ribosomes, which prevent the antibiotics from latching on. (Imagine, by way of analogy, installing a mesh strainer over your sink drain to prevent it from clogging.)

Fujimori’s team uncovered new insights into this resistance mechanism, such as how and where in the ribosome the obstructions are installed. The discovery, she said, could lead to new drugs that can be used on their own or in combination with existing antibiotics to overcome resistance. More recently, her lab teamed up with an international research group led by Nevan Krogan, PhD, a UCSF professor of cellular and molecular pharmacology and director of the Quantitative Biosciences Institute, to identify potential COVID-19 treatments by learning how the novel coronavirus, SARS-CoV-2, interacts with human host cells.

“Danica is a chemical biologist in the truest sense – she is a better chemist than any biologist and a better biologist than any chemist,” said Fujimori’s collaborator James Fraser, PhD, a professor in the Department of Bioengineering and Therapeutic Sciences and himself a Bowes Biomedical Investigator. This cross-disciplinary expertise has allowed her to expand the boundaries of both fields, he said.

“She is a rigorous, hard-nosed scientist who brings a chemical view and chemical tools to answering fundamental questions in biology,” added Wendell Lim, PhD, the Byers Distinguished Professor and chair of Fujimori’s department. “I’m thrilled that she is our next Bowes Biomedical Investigator. Especially now, when funding basic science is so challenging, this award allows someone like her to have the boldness to push her career in new, exciting directions.”

I’m thrilled that she is our next Bowes Biomedical Investigator. Especially now, when funding basic science is so challenging, this award allows someone like her to have the boldness to push her career in new, exciting directions.

The late William K. Bowes Jr., a venture capitalist and longtime UCSF supporter, created the Bowes Biomedical Investigator Program in 2016 with a $50 million endowment to foster high-risk, high-reward research. The program supports early- and mid-career scientists who take unconventional and transdisciplinary approaches that have the potential for significant impact. These scientists, while among the most innovative, often work outside historically defined disciplines, so they frequently fall through the cracks of traditional funding structures.

“It’s the single best resource any scientist could ask for – the complete intellectual freedom to follow your curiosity and passion and to be who you are as a scientist and as a member of a community,” said Holly Ingraham, PhD, a professor in Fujimori’s department. In addition to pursuing innovative research, Fujimori mentors junior colleagues and works to increase gender equity in basic science – an issue that has become even more acute during the COVID-19 pandemic as increased caregiving demands fall disproportionately on women researchers.

“We need more resources like the Bowes Biomedical Investigator Program to make sure we don’t lose our great women scientists,” Ingraham said. “For every deserving award recipient, there are 10 more junior faculty members waiting to capitalize on this type of financial boost.”

Fujimori plans to use her award to explore untrodden paths in biomedicine. One idea is to develop chemical tools that scientists could deploy into cells to control the processes by which genes are transcribed and translated into proteins. Such tools could one day aid in drug discovery or become therapies themselves.

“It’s these early explorations that are the riskiest and most difficult to find support for because they can seem very pie-in-the-sky,” Fujimori said. “That’s why I’m so excited and thankful to be part of the Bowes Biomedical Investigator Program. It really gives me the ability to tackle, without restrictions, the very ambitious, very far-out science I came here to do.”