Nearly 300 hundred experts gathered Wednesday at UCSF’s Mission Bay campus to discuss the global health emergency that is climate change and to call for action to protect human health and well-being.

“Health is deeply connected with climate change in so many ways, and climate solutions and reducing climate change are among the most important things we can do to protect health now and in the future,” said Naomi Beyeler, who leads the Global Health Group’s climate change and health initiative and helped organize the forum.

As an affiliate event for the Global Climate Action Summit, the forum shows the health sector “believes in and is advocating for climate change solutions and is taking action to address climate change in our work,” Beyeler said.

Health officials from around the world, including India, the United Kingdom, Lebanon, Kenya and Australia, and from international organizations and health care systems, discussed solutions and steps to reduce and cope with climate change. 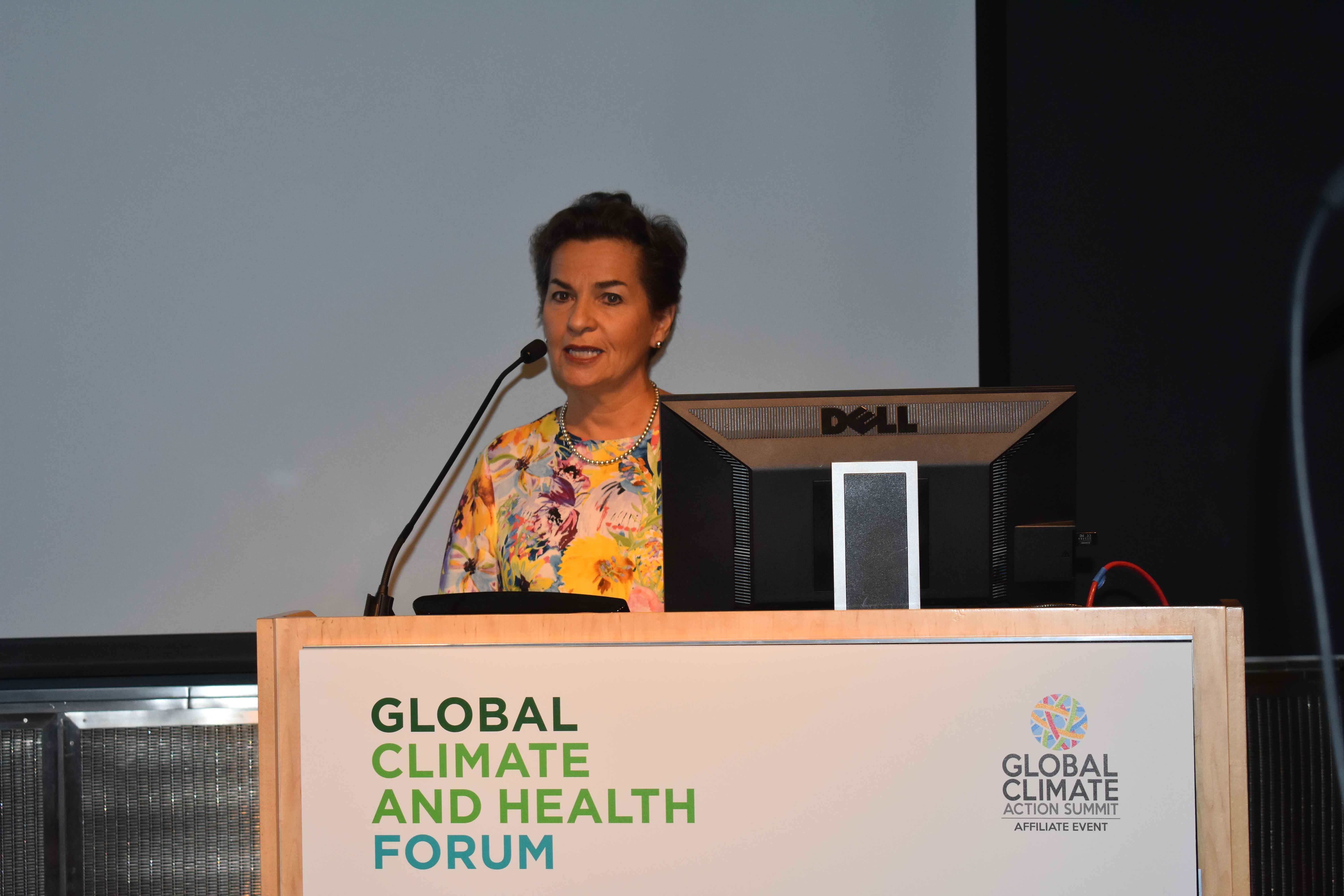 Experts recognize that, although many developing countries don’t significantly contribute to climate change, they will suffer most from it. Readying the global health community to help these countries prepare was one the goals for the forum. Topics included how climate change affects migration and immigration, global action for climate health and how countries and health officials can adapt to and develop resilience to climate change’s effects. Changes that hospitals and health systems can make to reduce their own carbon footprints were also discussed.

The stakes are incredibly high, said Christiana Figueras, former executive secretary of the United Nations Framework Convention on Climate Change, in her keynote address. Figueras compared climate change to the Great Stink in London in 1858, when British officials considered rerouting the befouled Thames away from wealthy neighborhoods and Parliament. That might have worked, she said, but ignoring climate change won’t.

“It won’t be so easy to move humanity from this planet to another planet,” she said.

Many speakers noted that now is the time for action, and that the United Nations has described 2020 as a tipping point. If significant steps aren’t taken by then, climate change will spiral more out of control. This could undo dramatic gains made in global health and development, such as increasing lifespan and reducing poverty and the rates of infectious diseases, and make it less likely that the world can meet the United Nations’ Sustainable Development Goals.

Sir Richard Feachem, director of the Global Health Group at the UCSF Institute for Global Health Sciences, said only three things could undermine the progress humankind has made: nuclear winter, meteor strike and climate change.

“The one that is already upon us, but that we can do something about and much more than we’re currently doing, is climate change,” he said.

Climate change is happening, it’s accelerating, and its effects on health are real and will get worse, he said. “That’s the bad news.”

“But the good news is we understand it and we can have an impact on it: we can attenuate its future magnitude. We can also invest in a way that makes us more resilient to whatever climate change brings.”

Many speakers noted that health officials, health care systems and international organizations have an essential role to play, both collectively and individually, in promoting actions to slow and cope with climate change.

Strong leadership matters, said Howard Frumkin, head of the Wellcome Trust’s Our Planet, Our Health initiative. People who work in health should support strong leaders in various sectors, but “we should step up and be leaders ourselves.”

Inaction by a nation’s government shouldn’t prevent private organizations, cities, states and regions from promoting change, speakers said. David Bunn, director of the California Department of Conservation, noted that California has frequently passed innovative legislation that the rest of the country was initially unwilling to support. But eventually, other states followed, and in many cases the federal government did as well.

Leeanne Enoch, Minister for Environment and the Great Barrier Reef in Queensland, Australia, said that Queensland is already dealing with more frequent extreme weather, rising sea levels, persistent drought and increasing skin cancer rates. Infectious diseases from the tropics, including zika and dengue fever, have appeared in Queensland. In response, the Queensland government has developed a transition plan and an adaptation strategy for climate change that includes health.

“We’ve had to step out on our own, given we’ve had some similar national leadership issues,” to the United States, she said. Although some Australian politicians might argue against the science, she said, “our citizens understand it absolutely.”

“I’m seeing a great take up around this and huge activism around what is expected into the future. That is propelling the work of governments, like you see in Queensland, but in other parts of the world as well,” she said.

International development agencies and global health organizations also have an important role to play. Maria Gracheva, operations advisor at the World Bank, noted that the bank has developed an internal tool that shows the climate risks of proposed projects. The bank is also incorporating measures to reduce climate change in projects, she said.

A final forum theme was that, to win the battle for public opinion, a clear, consistent, simplified message will be crucial. 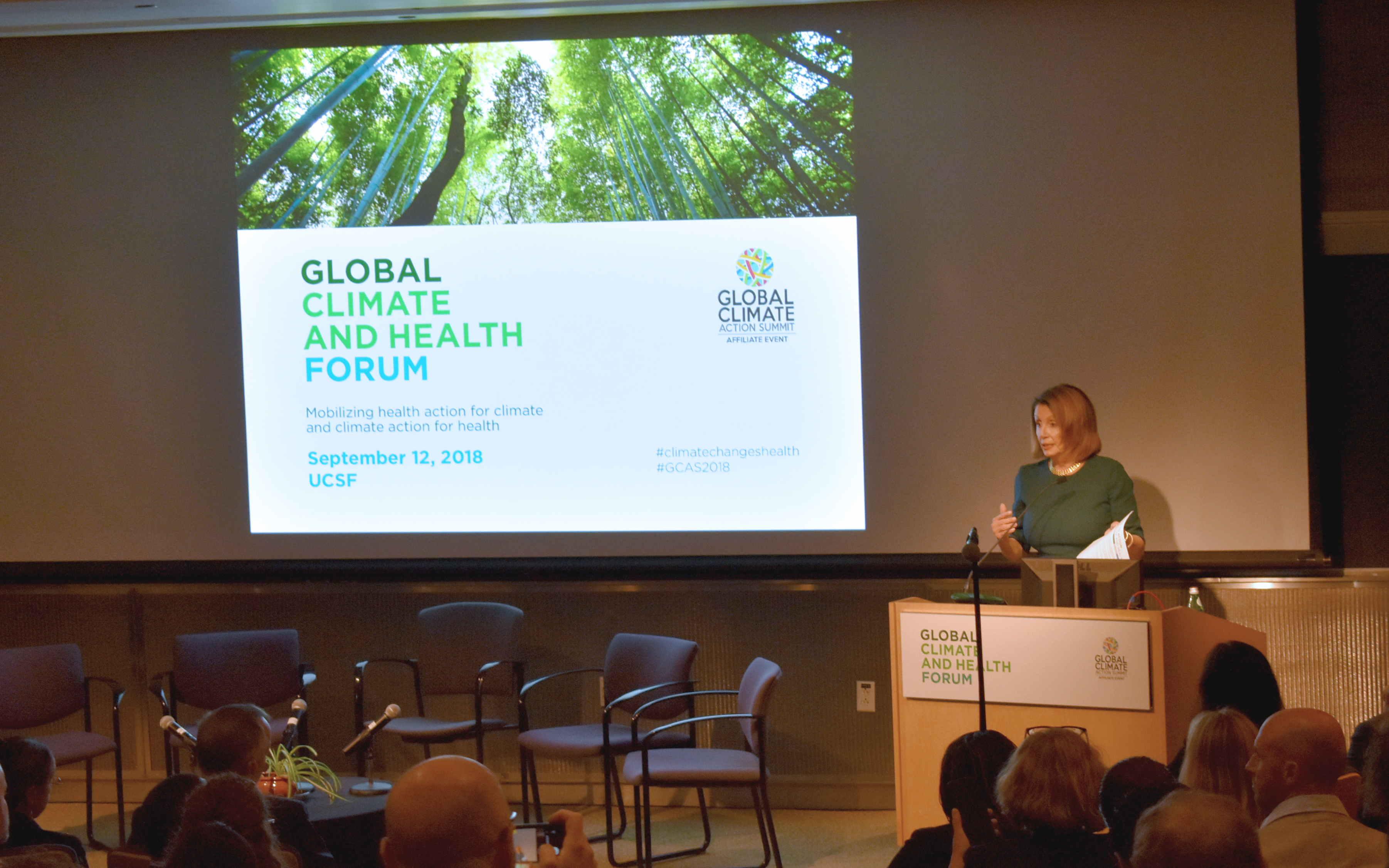 Nancy Pelosi, Democratic leader of the US House of Representatives,
presents the closing keynote address of the forum.

Congresswoman Nancy Pelosi, Democratic leader of the House of Representatives, also described the importance of communicating clearly about climate change in her closing keynote speech. Citing a quote from Abraham Lincoln, Pelosi said public opinion must be behind climate change action for the movement's success. For public opinion to shift, "we have to speak to [people] in the way that they receive information and that is: what is in the interest of their families and their children,” she said. “The subject that you're working on, the good health of people, that's essential to it all."

The conference ended with a call to action endorsed by many of the nation’s and the world’s most respected health organizations, including the American Academy of Pediatrics, the American Lung Association, the American Public Health Association, and the World Federation of Public Health Associations. The 10 priority actions in the call include to meet and strengthen commitments under the Paris Agreement, transition from fossil fuels to renewable energy, and incorporate climate solutions into all health care and public health systems.

Feachem of the Global Health Group said he hopes the forum has sparked change. He noted that health is a relative newcomer in the field of climate change, although it is “growing fast as a focus of interest.”

“My hope is that today’s meeting, through the call for action and the other discussions that are going on, will help to crystallize concrete actions, new collaborations, and funding commitments to support those actions and collaborations,” he said.

Adversity in Childhood May Lead to Early Aging for Women