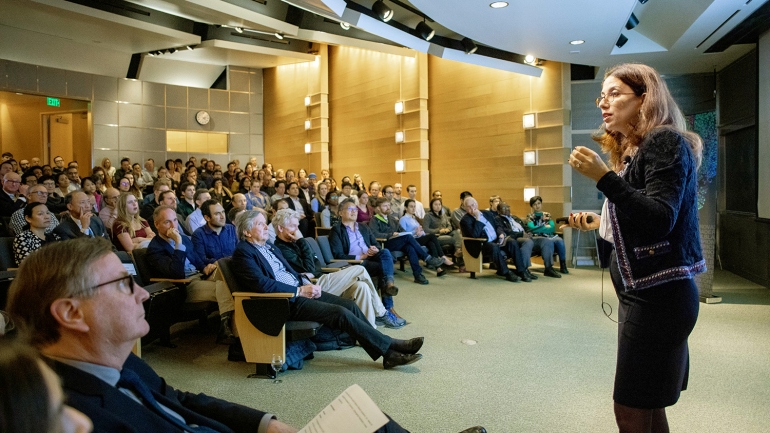 When Hana El-Samad, PhD, embarked on a quest to command a living cell with a computer, by remote control, she did it for no other reason than to see if it were possible.

And she discovered a way to do it: By engineering cells to receive and interpret light she could control the cells with a computer that emitted patterns of light pulses. She showed that she could manipulate and maintain the expression of a gene despite the cells’ own desires.

It was like playing a video game with cells.

“But inside every science game there’s always a serious question,” said El-Samad, professor of Biochemistry and Biophysics, who was supported in her early career by a Sandler Fellowship that gave her the freedom to pursue curiosity-driven work.

Among the serious questions in El-Samad’s current research is whether one day it may be possible to take a broken cell and bring it back to health by dynamically sensing its pathology and fixing it.

El-Samad delved into these questions while delivering the 2019 Byers Award Lecture in Basic Science. Her Jan. 31 talk was titled, “The Engineer’s Journey: Untangling Feedback Loops to Design Smart Cells.”

The Byers Award in Basic Science, establish with a philanthropic gift by Brook and Shawn Byers and their family, is awarded annually to recognize and support the outstanding research of a mid-career faculty member.

El-Samad also will be the inaugural holder of the Kuo Family Endowed Professorship, which was established by Julia Wong, MD, a pediatrician, and Roger Kuo, both of whom have many ties to UCSF. Wong’s father received his MD from UCSF in 1961 and completed his residency here. Kuo’s parents, molecular biologists and virologists, both worked at UCSF.

El-Samad leads an interdisciplinary lab that studies the basic design principles of biological signaling. Her research into the ways cells communicate and correct for disturbances is influenced by her background in electrical and mechanical engineering.

“I was born in Lebanon in the middle of a civil war – it was a country literally spinning out of every feedback control,” she said. “This is why when I was exposed in my first year of electrical engineering, to the concept that you can actually build systems that through feedback are robust through the commotions and the perturbations around them, it was like a magical notion.”

By engineering new feedback systems into cells, perhaps our own cells could be reprogrammed to be smart therapies. A cell could be programmed to adjust the amount of drug it produces, for example, or a swarm of cells could communicate with each other and fly through the body to deliver therapies. “We think this is very possible,” said El-Samad.

The next step, she said, is to build a computer inside the cell itself. She described her work designing a “dimmer switch” inside a cell. The switch, known as degronLOCKR, is a specially designed molecule that can be unlocked with a key to release a degradation tag. The switch can be appended to any molecule in the cell, and the key can be a peptide that is an output of the same molecular circuit. With degronLOCKR, a feedback loop is created that can correct for any disturbances to the system.

“The public often thinks of UCSF as a health care delivery university, and clearly we are that, but we have a very long and distinguished history in curiosity-driven basic science,” said Sam Hawgood, MBBS, UCSF chancellor and the Arthur and Toni Rembe Rock Distinguished Professor, in his opening remarks. “There is nobody more emblematic of this convergence of intellectual talent with technologic innovation in tackling the big ideas than this year’s Byers awardee, Dr. Hana El-Samad.”