For something we spend one-third of our lives doing, we still understand remarkably little about how sleep works – for example, why can some people sleep deeply through any disturbance, while others regularly toss and turn for hours each night? And why do we all seem to need a different amount of sleep to feel rested? 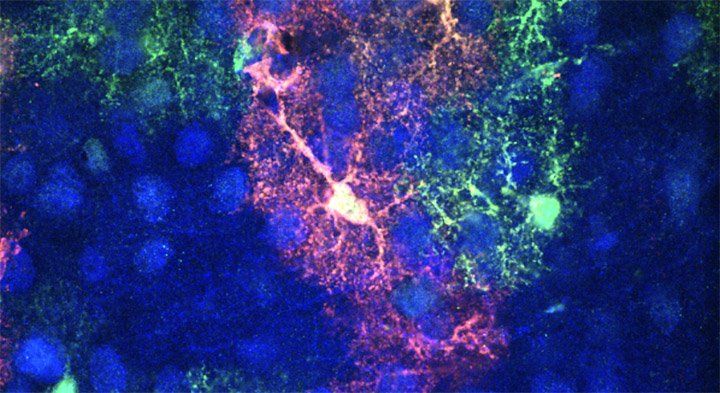 UCSF researchers have found that astrocytes impact the length and depth of sleep in mice – a finding that could open new avenues of studying sleep in humans. Image by Poskanzer lab

For decades, scientists have looked to the behavior of the brain’s neurons to understand the nature of slumber. Now, though, researchers at UC San Francisco have confirmed that a different, long under-studied type of brain cell – astrocytes, named for their star-like shape – can influence how long and how deeply animals sleep. The findings could open new avenues for exploring sleep disorder therapies and help scientists better understand brain diseases linked to sleep disturbances, like Alzheimer’s and other dementias, the authors say.

“This is the first example where someone did an acute and fast manipulation of astrocytes and showed that it was able to actually affect sleep,” said Trisha Vaidyanathan, the study’s first author and a neuroscience graduate student at UCSF. “That positions astrocytes as an active player in sleep. It’s really exciting.”

When we’re awake, our brains are a Babel of disjointed neuronal voices chattering amongst themselves to allow us to work through life’s daily tasks. But when we sleep, the voices of signaling neurons meld into a unified chorus of bursts, which neuroscientists call slow-wave activity. Recent research had suggested that astrocytes, not just neurons, may help trigger this switch.

Comprising an estimated 25 percent to 30 percent of brain cells, astrocytes are a type of so-called glial cell that blanket the brain with countless bushy tendrils. This coverage allows each individual astrocyte to listen in on tens of thousands of synapses, the sites of communication between neurons. The plentiful cells connect to each other through specialized channels, which researchers think may allow astrocytes located across the brain to function as one unified network. The hyperconnected and ubiquitous astrocytes might be able to drive synchronized signaling in neurons, as suggested by the new study, published March 17, 2021, in eLife.

“This could give us new insights not only into sleep but into diseases in which sleep dysregulation is a symptom,” said study senior author Kira Poskanzer, PhD, an assistant professor in the UCSF Department of Biochemistry and Biophysics. “Maybe some diseases are affecting astrocytes in a way we hadn’t thought about before.”

Poskanzer and her team tracked changes in slow-wave activity in the brains of mice while manipulating astrocytes using a drug that can switch the cells on in genetically engineered animals. Slow-wave activity can be represented in much the same way as vibrations from an earthquake are scratched out on a seismograph. When the brain’s awake, the resulting traces are typically a dense scribble of short and jerky motions. But when slow-wave activity kicks in during certain stages of sleep, the signal slows, lazily looping up and down to create a trace with deep valleys and high peaks. The researchers found that firing up astrocytes led to more slow-wave activity – and thus sleep – in the mice.

But the team wanted to examine astrocytes’ role in finer detail, asking how these cells exert their influence and what aspects of sleep they manage.

In addition to the specialized junctions that join neighboring astrocytes, these cells are studded with a variety of receptor molecules that allow them to respond to signals coming from neurons and other types of cells around them. In the study the team hijacked two of these molecules – called the Gi and Gq receptors – and found that they each appeared to control a distinct aspect of sleep. Activating Gq receptors made animals sleep longer, but not more deeply, according to slow-wave measurements, while engaging Gi receptors put into a much deeper slumber without affecting sleep duration.

“Depth and duration are aspects of sleep that often get glossed over and lumped together even in neuroscience,” said Vaidyanathan. “But picking apart these different aspects and how they’re regulated is going to be important down the line for creating more specific sleep treatments.”

The team also found that astrocyte activity has long reach across the brain: triggering astrocytes in one part of the cortex could affect neuronal behavior at a distant point. The researchers are eager to look further into the extent of this influence and to continue to study how different astrocytic receptors work together to impact sleep, Poskanzer says.

Authors: Kira Poskanzer is the senior and corresponding author, and Trisha Vaidyanathan is the study’s first author. Other authors were Max Collard, Sae Yokoyama and Michael E. Reitman, all of UCSF.

Want to Be Robust at 40-Plus? Meeting Minimum Exercise Guidelines Won’t Cut It