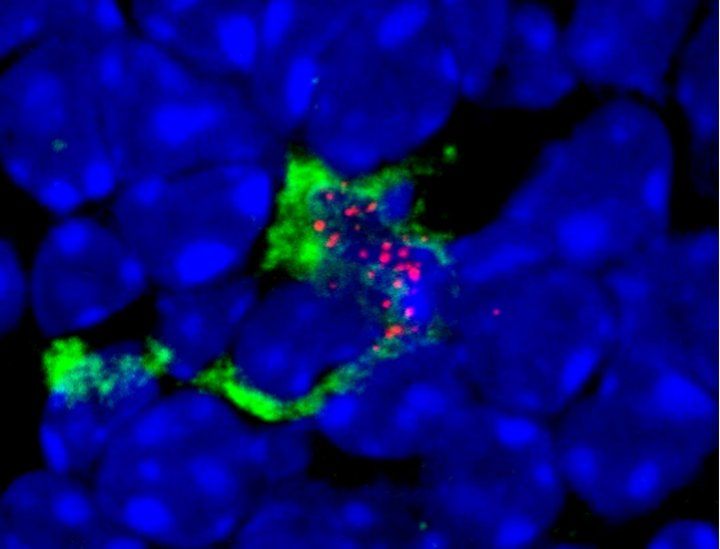 A healthy pregnancy may depend on eTAC cells shown here. Image credit: UCSF

Researchers at UC San Francisco are zeroing in on how the immune system may play a role in miscarriage, which affects about a quarter of pregnancies.

Working in mice, the researchers have found that a recently discovered subset of cells in the immune system may prevent the mother’s immune system from attacking the placenta and fetus. If the research is confirmed in further animal studies, and the cells play a similar role in people, they could point the way toward new therapies for pregnancies that are threatened by defects in immune tolerance.

The researchers showed that pregnant mice who did not have this subset of cells, known as extrathymic Aire-expressing cells, were twice as likely to miscarry, and in many of these pregnancies fetal growth was severely restricted.

“When you’re pregnant, the immune system is seeing the placenta for the first time in decades – not since the mother made a placenta when she herself was a fetus,” said Eva Gillis-Buck, MD, a UCSF surgery resident and first author of the paper in Science Immunology.

“Our research suggests that this subset of immune cells is carrying out a sort of ‘secondary education’ – sometimes many years after the better-known population of the educator cells have carried out the primary education in the thymus – teaching T cells not to attack the fetus, the placenta and other tissues involved in pregnancy.”

The immune system has to be educated not to attack one’s own tissues and organs to prevent autoimmune disease. But pregnancy presents a unique challenge, since the fetus expresses proteins found in the placenta as well as proteins whose genetics are distinct from the mother.

“It was a conceptual leap to link Aire-expressing cells, which are critical for preventing autoimmune disease, to pregnancy,” said Tippi Mackenzie, MD, professor of surgery and co-director of the UCSF Center for Maternal Fetal Precision Medicine and a senior author of the paper. “This work hints at a mechanism for the known association between autoimmune disease and pregnancy complications.”

Like the better-known educator cells in the thymus, the rare subset – originally discovered by James Gardner, MD, PhD, an assistant professor of surgery, investigator in the UCSF Diabetes Center, and a senior author of the study – is known for their ability to express a unique protein called the Autoimmune Regulator, or Aire. Aire has been extensively studied in the thymus, where it helps define the curriculum of this “high school” for the immune system.

But the Aire-expressing cells under study reside outside the thymus in the lymph nodes and spleen, so they are called extrathymic Aire-expressing cells, or eTACs. Their role in the immune system is not fully known, although the UCSF scientists suspect they provide a mechanism for “continuing education.”

The pregnancy finding is the first evidence that eTACs play a role in the maintenance of normal immune tolerance. In the thymus, Aire-expressing cells begin interacting with other immune cells very early in life to teach them what not to attack. The thymus begins to shrink and is nearly gone by adulthood, by which time most immune cells have been educated.

But as the thymus shrinks, the population of eTACs in lymph nodes and the spleen expands. The study suggests a healthy pregnancy may depend on having these cells around.

To tease apart the normal role of this outlier population of Aire-expressing cells, the researchers used genetically engineered mice from the Gardner lab to delete eTACs selectively during pregnancy.

“Understanding how the immune system normally gets educated to distinguish ‘self’ from ‘non-self’ is a very fundamental problem in biology,” Gardner said. “Once we know the basic wiring of this self-education system, we hope to do all kinds of powerful things – like modify the curriculum to improve pregnancy outcomes, prevent autoimmunity, or promote tolerance of transplanted organs.”