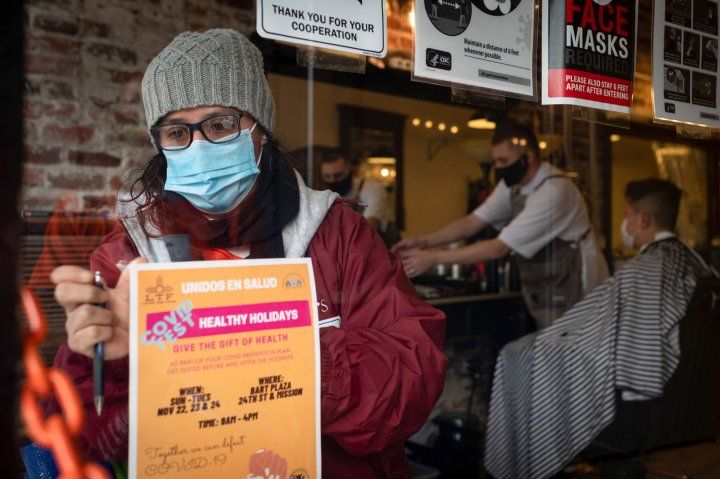 COVID-19 infections are once again rising at an alarming rate in San Francisco’s Latinx community, predominantly among low-income essential workers, according to results of a massive community-based testing blitz conducted before and after the Thanksgiving holiday by Unidos En Salud – a volunteer-led partnership between the Latino Task Force for COVID-19 (LTF), UC San Francisco, the Chan Zuckerberg Biohub (CZ Biohub), and the San Francisco Department of Public Health (SFDPH).

Unidos En Salud launched their “Healthy Holidays” initiative the weekend before Thanksgiving (Nov. 22-24) in San Francisco’s Mission District, where they have been perfecting their community-based surveillance testing and response program and solidifying relationships with community members through the LTF since April. The initiative then expanded testing after the holiday (Nov. 29-Dec. 1) to three additional highly impacted neighborhoods – the Bayview, Excelsior, and Tenderloin.

“Cases have been surging for weeks, and it was clear that the holiday season this year was going to present a high risk for accelerating the spread of the virus,” said UCSF infectious disease expert Diane Havlir, MD, co-Founder of the Unidos En Salud initiative, who presented initial findings to LTF community partners on December 7, 2020. “Rather than wait and see what would happen, UCSF and the Latino Task Force decided to respond proactively with a surge of our own, in partnership with DPH, focused on the communities where we knew the hammer was going to fall hardest.”

“As the region enters a renewed phase of lockdown, these results are a reminder the brunt of this disease is still being felt by Latinos and people without the economic privilege to easily shelter in place. Because existing disparities, it is often those with the least who are being hurt the most, people who are often working multiple jobs just to make rent and keep food on the table for themselves and family,” said LTF Health Committee Chair, Jon Jacobo, one of the initiative’s organizers. “If we truly want to turn this pandemic around, we need to fundamentally change how we are addressing the pandemic and how we are supporting the most vulnerable among us.”

Following six days of intensive and strategic door-to-door community canvassing by LTF volunteers – which focused on census tracts with the highest number of cases according to SFDPH data – the Healthy Holidays initiative ultimately tested more than 6,800 people before and after the Thanksgiving holiday. 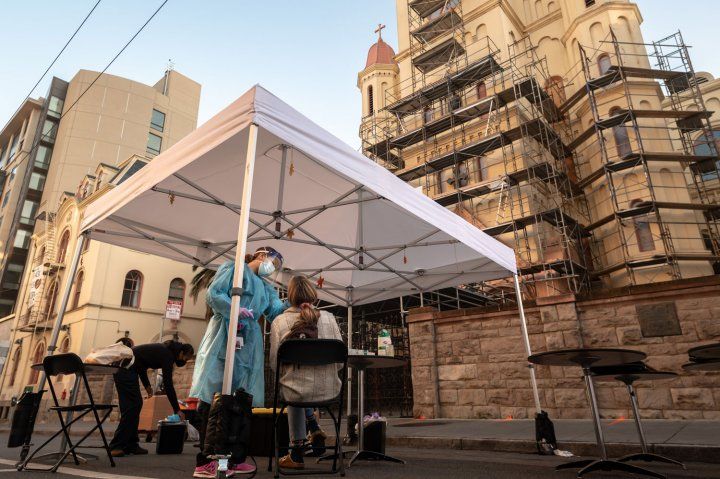 UCSF technicians test a San Francisco resident for COVID-19 at a pop-up test site in the Tenderloin. Photo by Mike Kai Chen

Organizers reported a test positivity rate of 4.4 percent across the initiative’s four post-holiday test sites, exceeding the city’s 2.9 percent seven-day average during the current surge, as of December 9. Although just over half of those tested were Latinx, a disproportionate 79 percent of positive results came from the Latinx community. At the Mission test site at 24th St. BART Plaza, where overall cases were highest, one in 10 Latinx individuals tested positive for the virus. Infection rates were also particularly high among low-income workers, including food and beverage workers and day laborers, as well as among people with indigenous backgrounds, particularly from Mexico and Central America.

The initiative found that about a third of infected individuals were asymptomatic at the time of testing and more than half were unaware of having been exposed to the virus, emphasizing the need for continued vigilance in combating a disease that can spread rapidly without detection.

"These ongoing partnerships for prevalence studies in high-impacted communities continue to inform local health strategy and policies," said Dr. Grant Colfax, Director of the San Francisco Department of Public Health. "The information and data gathered help guide not only health policy but the city's overall approach to supporting communities disproportionately impacted by this virus."

Unidos En Salud previously conducted one of the first field tests of the BinaxNOW rapid antigen test, manufactured by Abbott, in a community setting at their September testing pop-up at the 16th and Mission BART Plaza. Collaborators at CLIAhub, the joint UCSF/CZ Biohub COVID diagnostic laboratory that has provided test analysis for all of the group’s initiatives, compared BinaxNOW results to PCR results from the same individuals and found the rapid test to be extremely reliable at identifying infected individuals during the most infectious phase of the disease.

In the much larger holiday testing event, the group put the BinaxNOW tests to use for the first time as a proof-of-concept of their potential usefulness in broader surveillance testing efforts. As in September, individuals at the group’s Mission District test site gave two nasal swabs, one to be sent for standard PCR analysis at CLIAhub, and the second inserted on site into a BinaxNOW card, which is similar to a pregnancy test, providing results within 15 minutes. The speed of the results allowed team members to notify those who tested positive within hours rather than days, and to provide on-site counseling and support for immediate quarantine. The rapid results also allowed SFDPH to quickly initiate contact tracing.

Comparison to PCR results from the same individuals, completed 24 to 48 hours later, showed the tests had accurately identified more than 99 percent of individuals considered to be highly contagious. The researchers also found the tests to perform well in children, contrary to recent reports.

Connecting People with Resources to Isolate

For all who tested positive, whether on PCR or rapid tests, LTF Community Wellness Team members followed up to connect infected individuals to support for successful quarantine, including food, cleaning supplies and referrals to resources such as city-funded isolation and quarantine hotels. 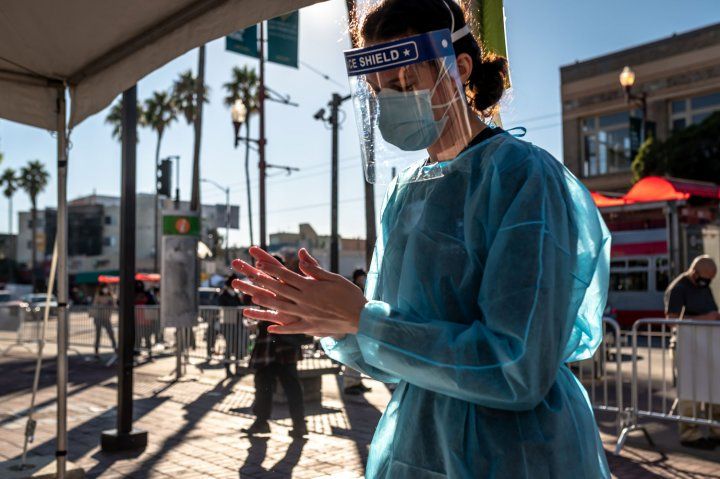 A UCSF technician sanitizes her hands before putting on new gloves at a pop-up COVID-19 test site at the 24th Street Mission BART Station. Photo by Mike Kai Chen

The initiative also complemented SFDPH contact tracing with a follow-up home testing program for infected individuals living in large households, connecting as many as possible with resources for effective isolation through LTF’s Community Wellness Teams.

“Community members I spoke with at the testing site who tested positive on rapid tests were eager to get close contacts tested out of a sense of responsibility for protecting loved ones, coworkers, and the larger community,” said UCSF infectious disease clinical fellow Luis Rubio, MD, who was part of the initiative’s clinical response team.

Volunteers provided rapid and PCR-based testing to household members within a day of the initial positive result and then again after a week. These visits included a trusted community health worker who could answer questions and give households specific guidance on how to safely isolate.

“Having rapid COVID-19 test results and dedicated time and space for household contacts to ask the community health worker questions was very much appreciated by families and we hope these services will support people in large households to effectively isolate and quarantine and decrease transmission,” said UCSF infectious disease specialist Carina Marquez, MD, who led the household testing program.

Unidos En Salud organizers, who have now provided free COVID-19 testing to 14,000 people since April through their regular weekly and larger pop-up initiatives, believe the community-based test-and-respond approach they have developed in their work in the Mission District could be a model for more effectively controlling the virus amidst the current frightening surge. 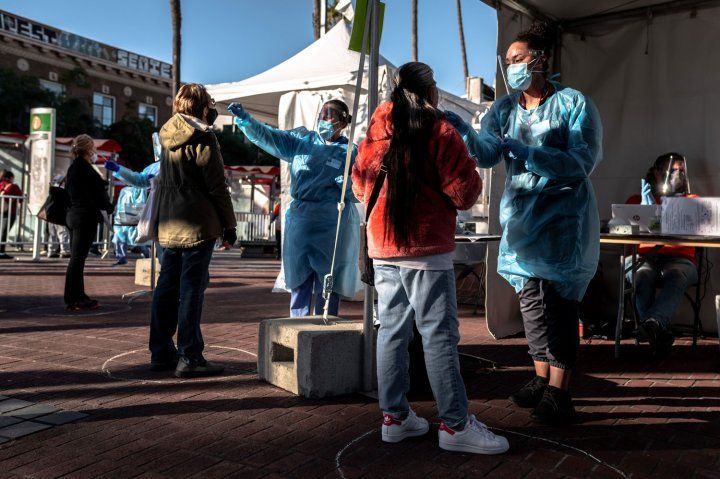 “We need to be making it as easy as possible for everyone in communities most affected by the virus to get tested regularly, symptoms or no, and to get people who test positive into isolation as quickly as possible with supportive services to cut off the chain of transmission. This approach will continue to be critical as the new vaccines become available ,” said Havlir, who is chief of the UCSF Division of HIV, Infectious Diseases and Global Medicine.

To reach as many people in affected communities as possible, regardless of symptoms or resources, the group’s low-barrier testing is not only free, but requires no reservations, no health insurance, and no identification — anyone can walk up and get tested. It is also community based and staffed — located at convenient public transit hubs and community centers in the most affected neighborhoods, and organized, staffed and operated by members of the community being served.

“A critical component of our success is the many volunteers from the community who are involved in initial canvassing, coordinating testing onsite and the Community Wellness Teams that follow up with people who test positive,” Jacobo said. “This has let us provide wrap-around services that are tailored to the need of each patient but are also culturally competent, and all are built upon the trust we have been building through our deep relationships with the community.”