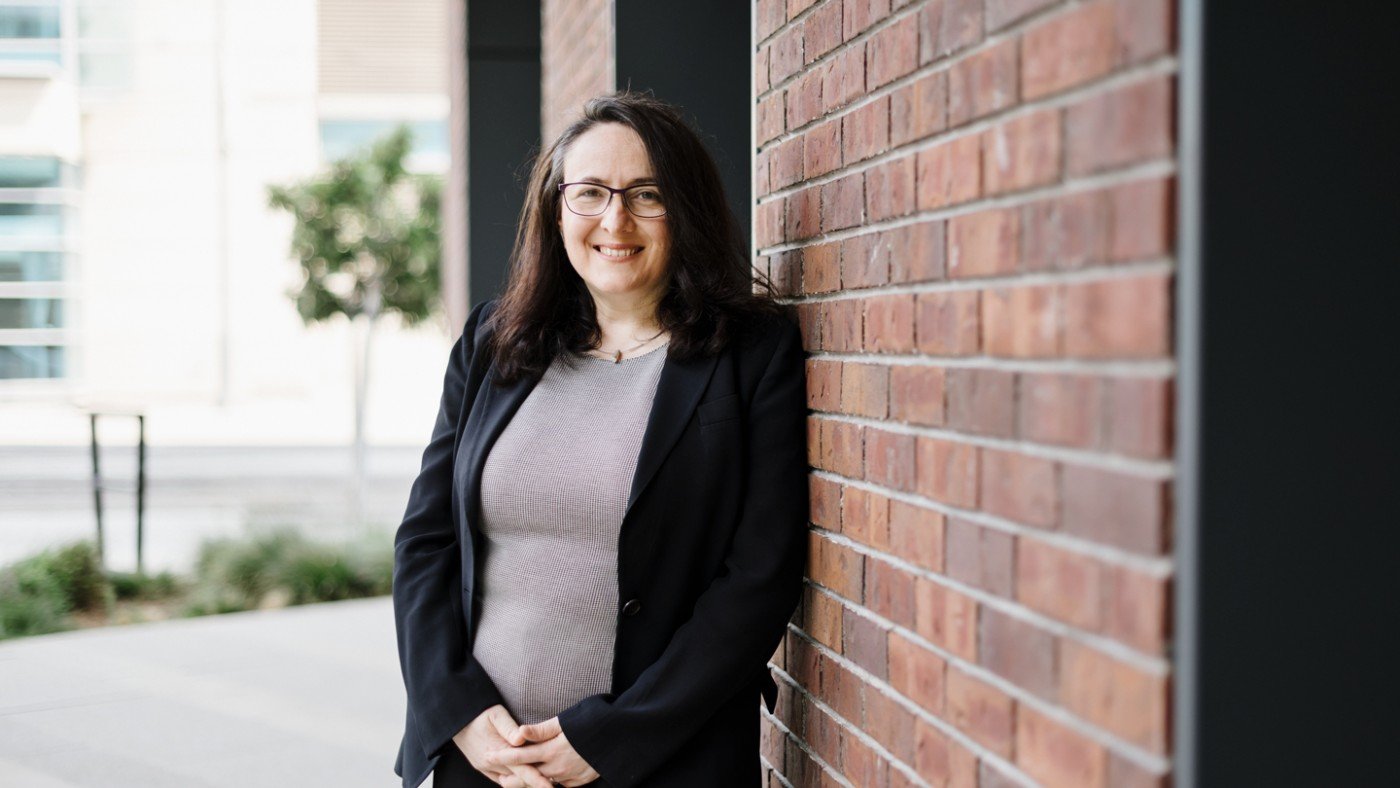 Katerina Akassoglou will lead the new Gladstone-UCSF Center for Neurovascular Brain Immunology, which brings together a unique combination of expertise to enable novel therapies for Alzheimer’s disease and multiple sclerosis.

A team of scientists at Gladstone Institutes and UC San Francisco (UCSF) is launching the Gladstone-UCSF Center for Neurovascular Brain Immunology to study neurological diseases in a unique way that could lead to the development of novel treatments. This launch is supported by a $2.5-million donation from the Simon Family Trust.

The new center will provide an integrated platform for basic and clinical research, bringing together vascular biology, immunology, and neuroscience. This combination will bridge the gap between scientific disciplines that have traditionally been viewed as distinct, and studied as such.

“Historically, neurological diseases have been classified as being only degenerative, inflammatory, or vascular,” explains the center’s founding director, Katerina Akassoglou, PhD. “But we now know, given recent insights from clinical research and the failure of many clinical trials, that this classification cannot explain how diseases start and progress, nor has it been able to identify the best potential drug candidates.”

Scientists have also learned that disease manifestations cannot be described in isolation, because they arise from an intricate network of shared mechanisms in the brain, immune, and vascular systems. The new Gladstone-UCSF center aims to shed light on these overlapping mechanisms to develop new treatments for a wide range of neurological diseases, such as multiple sclerosis, Alzheimer’s disease, and traumatic brain injury. Their work will also have broad implications in diseases with neuroimmune and neurovascular features, including neonatal brain injury, epilepsy, infectious diseases, and psychiatric disorders.

“Common threads across brain diseases that involve the immune system have been overlooked,” says Akassoglou, who is also a senior investigator at Gladstone and a professor of neurology at UCSF. “For instance, blood leaks in the brain used to be considered a consequence of brain dysfunction. Yet, we have discovered that these leaks often precede cognitive decline in neurodegenerative disease and inhibit repair. In addition, vascular damage is emerging as a central player in brain disease, and the immune system is the link between vascular pathology and the brain.”

Over the past two decades, Akassoglou and her team have made landmark discoveries that connect the blood, the inflammatory response, and brain disease. For example, they made a breakthrough discovery that a clotting factor in the blood (called fibrinogen) is causal to disease in the brain, as its leakage is required to activate the damaging immune response and the neurodegeneration that follows.

“We have a new appreciation of the challenges and opportunities in drug discovery for neurodegenerative diseases at the blood-brain-immune interface,” says Akassoglou. “Innovative approaches in imaging and drug discovery platforms at our new center have the potential to transform biomedicine.”

“This new center perfectly aligns with Gladstone’s approach of using science to overcome disease,” says Deepak Srivastava, MD, president of Gladstone Institutes. “Katerina’s research provided evidence that vascular pathology is a primary process in the development of disease and, as a result, offers a completely new perspective for how neurological diseases might be treated. Her expertise and vision led to the creation of this center, which will be critical for basic discovery and for developing novel imaging tools, biomarkers, and therapies.”

Although other academic centers combine neuroscience and immunology, the new Gladstone-UCSF center is unique in its integration of vascular biology as a third and equal player in brain disease. “The new center will leverage Katerina’s groundbreaking discoveries in this exciting area of research and will provide her and other colleagues at Gladstone, UCSF, and beyond with unprecedented opportunities to unravel the intriguing relationships among the vascular, immune, and nervous systems,” says Lennart Mucke, MD, director of the Gladstone Institute of Neurological Disease. “Since vascular mechanisms may be early triggers of brain disease, targeting these triggers could allow physicians to intervene much sooner to prevent and halt disease progression.”

The center will take a three-pronged approach to uncover the role of vascular abnormalities in the brain. The first will be focused on research and bring together basic and clinical scientists to discover new mechanisms that control disease at the interface of vascular biology, immunology, and neuroscience. The second will leverage cutting-edge imaging technologies to develop new molecular probes to study and diagnose neurovascular alterations in brain diseases. And the third cluster, aimed at drug discovery and therapeutics, will consist of pre-clinical and clinical testing of new biologic, cellular, and small molecule therapies, as well as biomarker studies.

Akassoglou and her team at Gladstone will collaborate closely with scientists at UCSF in the Weill Institute for Neurosciences, the Department of Neurology (including the Memory and Aging Center, the Division of Neuroimmunology and Glial Biology, and the Neurovascular Division), the Department of Pediatrics, and the Department of Pharmaceutical Chemistry. While Gladstone offers expertise in basic research and state-of-the-art imaging modalities, UCSF provides invaluable resources in patient databases, clinical testing, and biomarker studies.

“To implement the center’s visionary approach, we need the participation of scientists and clinicians with wide-ranging expertise,” says S. Andrew Josephson, MD, chair of the Department of Neurology at UCSF. “Together, the Gladstone and UCSF communities provide an ideal environment to unite all the required disciplines and truly break new ground in treating neurological diseases.”

The donation of $2.5 million by the Simon Family Trust will help launch this center by providing support for state-of-the-art infrastructure and seed funding for innovative multidisciplinary research projects.

“This new Gladstone-UCSF center promises to truly advance the field of neurological disease research,” says Nick Simon, director of the Simon Family Trust who is also a trustee of Gladstone Institutes. “My family and I hope that our contribution will help the incredible team of scientists uncover some of the mysteries behind this very complicated collection of diseases and make a major impact on future treatments, which represent one of the most significant unmet clinical needs at this point in time.”

In addition to Akassoglou, key members of the Gladstone-UCSF Center for Neurovascular Brain Immunology include researchers Scott Zamvil, Jorge Palop, Bruce Miller, Lennart Mucke, and Michelle Arkin, as well as junior investigators and physician-scientists Jae Kyu Ryu, Mark Petersen, and Fanny Elahi. Research in the center is further leveraged by several national and international collaborations, including a long-standing collaboration with Mark Ellisman at the National Center for Microscopy and Imaging Research at UC San Diego. Additional members and partnerships will be added as the center develops.

“The intersection of the brain, immune, and vascular systems represents a new frontier in biomedical research,” says Akassoglou. “I’m very excited by the opportunities for new discoveries created by this new center, which can fundamentally change the way we think about neurological diseases and the development of new therapies.”