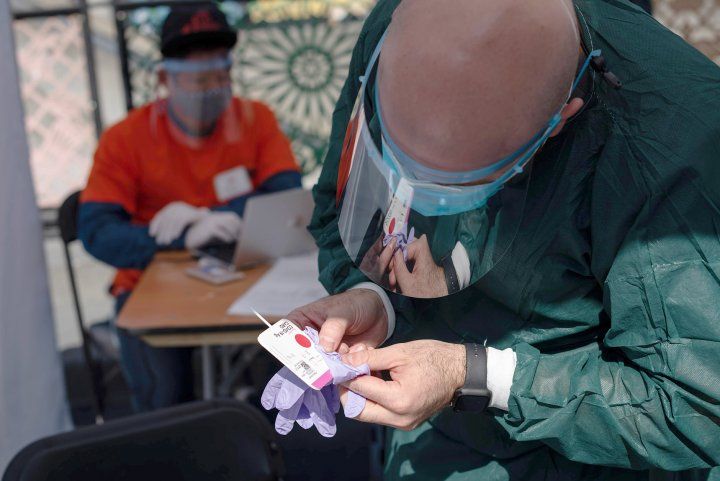 UCSF volunteers work at a COVID-19 pop-up testing site around 16th Mission BART station. The testing was part of a series of initiatives by Unidos en Salud — a partnership between UCSF and the Latino Task Force for COVID-19. Photo by Mike Kai Chen/Unidos en Salud

Preliminary data from a study by UC San Francisco and Chan Zuckerberg Biohub scientists suggests that new rapid COVID-19 tests now being distributed to public health departments nationwide could be a valuable tool to accelerate the COVID-19 public health response. The new tests — if used correctly and as a complement to existing gold-standard PCR testing — show promise for use in community settings to rapidly and affordably identify individuals with and without symptoms who are most likely to be actively infectious, individuals who should be the highest priority for isolation to prevent further transmission, the researchers say.

Since the beginning of the COVID-19 pandemic, governments, businesses, and healthcare providers have relied on PCR-based tests to identify people infected with the SARS-CoV-2 virus. These tests are highly sensitive, but are also expensive, require specialized equipment, and can take days to return results — often too slow for effective infection control.

Recently, so-called rapid tests — less sensitive than PCR but able to provide results in 15 to 30 minutes — have been emerging as a potential complement to PCR testing. On Aug. 27, the U.S. Department of Health and Human Services (HHS) announced that the Federal government had purchased 150 million BinaxNOW rapid COVID-19 tests, designed and manufactured by Abbott, and these are currently being sent to public health departments across the country to accelerate COVID-19 testing.

So far, these tests are only approved for clinical use by healthcare providers to diagnose people who are suspected of having COVID-19 and are within their first seven days since symptom onset. But the UCSF/Biohub researchers, who have been conducting community-based COVID-19 testing since April, set out to evaluate how the rapid tests perform in an open-air community testing environment. The researchers aimed to assess whether these tests are accurate enough to quickly identify individuals at highest priority for isolation.

“Our results suggest this test is likely to be a valuable addition to our arsenal in the fight against COVID-19. They are inexpensive and fast enough that we could test much more frequently to help stem the tide of infection in the locations and populations that need it the most,” said CZ Biohub Co-President Joe DeRisi, PhD, a professor in the Department of Biochemistry and Biophysics at UCSF, whose team led the analysis of the BinaxNOW tests at the CLIAhub, a joint UCSF/Biohub COVID diagnostic laboratory. “We are happy to be able to provide this data to our long-time partners at the California Department of Public Health to inform their deployment of the hundreds of thousands of test kits currently being supplied by HHS.”

At the end of September, Unidos En Salud, a partnership between UCSF and the Latino Task Force for COVID-19 that has documented since April the pandemic’s outsize impact on the City’s Latinx community, conducted its third free community testing initiative in San Francisco’s Mission District. The initiative, in collaboration with the City and County of San Francisco, BART (Bay Area Rapid Transit) and SFMTA (the San Francisco Municipal Transit Agency), provided “low barrier” PCR-based testing at the 16th and Mission BART Plaza to all comers, with no requirement for an appointment, ID card or proof of insurance. At the community’s request, a flu vaccine clinic was set up nearby.

In addition to the initiative’s ongoing goals of shedding light on the prevalence of COVID-19 in the Mission and innovating best practices for community-based testing, September’s study had the additional goal of evaluating the performance of the BinaxNOW rapid test in a real-world setting.

Participants provided one nasal swab sample for standard PCR-based COVID-19 testing at CLIAhub, and a second that was inserted into a BinaxNOW card, a so-called lateral flow assay that detects proteins associated with the SARS-CoV-2 virus. The card can be easily read by a trained technician, much like a pregnancy test: after 15 minutes, one line means negative, two lines means positive. (Because the BinaxNOW test had not yet been validated for use in a community setting, participants in the testing initiative only received results from the PCR tests.)

“It was important for the Task Force to be part of creatively innovating in our response to this virus that has disproportionately hit the Latinx community in San Francisco and elsewhere,” said Jon Jacobo, health committee chair of the Latino Task Force. “Our vision of the future is that these rapid tests could be used to ensure that when our community members test positive, we can immediately support households and places of work to ensure that all impacted individuals know their status and are afforded resources to successfully shelter in place.”

The initiative tested 879 people over three days. Twenty-six individuals tested positive on PCR tests and were connected to care and support for isolation through the community “test to care” model that Unidos en Salud has pioneered and delivered in partnership with the San Francisco Department of Public Health.

The results showed that rates of COVID-19 infection have declined significantly since the group’s August community testing initiative — from an average positivity rate of 9% in early August to 3% in late September — reflecting overall trends in San Francisco. However, the testing also showed that the virus continues to predominantly and disproportionately affect the Latinx community.

Comparison of PCR and BinaxNOW results from the same individuals showed that the rapid tests accurately identified 14 of 15 (93%) individuals who were most likely to be actively infectious, as measured by the high amount of virus detected in their samples by PCR; nearly half of these individuals were asymptomatic at the time of testing.

Eleven people with negative BinaxNOW test results were positive on PCR tests, though all had lower virus levels than those who tested positive in the rapid tests. These results illustrate that the tests do not clearly distinguish between uninfected people and people with lower levels of the virus, for example at the earliest or later stages of infection. The researchers recommend that persons with negative rapid test results who are at high risk or who come in contact with vulnerable populations such as the elderly or immune-compromised should get additional confirmatory tests, as there is still risk of spreading the virus.

“Breaking the back of this pandemic can be accelerated if we could deploy and act on a rapid test that detects the persons who are most infectious and require isolation, many of whom may be asymptomatic,” said study principal investigator Diane Havlir, MD, chief of the UCSF Division of HIV, Infectious Diseases and Global Medicine at Zuckerberg San Francisco General Hospital and Trauma Center (ZSFG). “PCR remains the gold standard, but a strategic combination of these tests could assist in public health settings where rapid results and knowledge of transmission risk on the day of testing are critical.”

“It is important to stress that these tests will help stem the epidemic when they reach the most affected populations and are combined with supportive and community rapid-response teams in addition to — not in place of — mask wearing, social distancing and hand washing,” Havlir added.

Funding: The study was funded by the Heising-Simons Foundation and a gift from an anonymous donor through the UCSF COVID-19 Community Public Health Initiative. PCR results were analyzed at the UCSF/Biohub CLIAhub diagnostic laboratory, and BinaxNOW kits were donated by Abbott. The researchers did not receive any funding from Abbott.