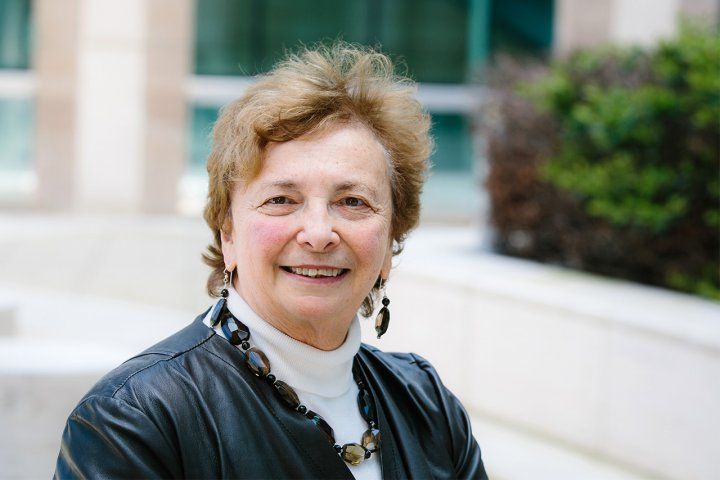 Colleagues are mourning the passing of Zena Werb, PhD, a giant in the field of cancer biology whose four decades of research at UC San Francisco informed the rise of immunotherapy and other modern approaches to cancer treatment. Werb, who was a professor in the Department of Anatomy and associate director for basic science at the UCSF Helen Diller Family Comprehensive Cancer Center, died unexpectedly on June 16 at the age of 75.

“Zena was a world expert on how the extracellular environment influences breast development and breast cancer, as well as an incredible mentor to numerous students and postdocs and fierce advocate for women in science,” said Talmadge E. King Jr., MD, dean of the School of Medicine. “She will be dearly missed by her many friends and colleagues at UCSF and throughout the world.”

In her more than 40-year tenure at UCSF, Werb’s research transformed the field of cancer biology by highlighting the critical role of cells’ local “neighborhoods” in determining tumor growth and behavior.

“She completely opened up the field,” said Lewis Lanier, PhD, chair of the Department of Microbiology and Immunology, who previously served with Werb as director of the UCSF Cancer Immunology Program. “For many years, people had just thought of tumors as autonomous collections of mutant cells. But Zena brought everyone’s attention to the importance of the cellular environment surrounding tumors, which she showed plays a key role in whether tumors stay in place where they can be surgically removed, or else escape and metastasize. Virtually all cancer deaths are caused by metastasis, and understanding this process was Zena’s passion.”

“Zena was scientifically fearless,” said Valerie Weaver, PhD, professor of surgery and director of the UCSF Center for Bioengineering and Tissue Regeneration and one of Werb’s closest collaborators and friends. “Zena constantly reinvented herself and her lab to follow the data wherever it led, picking up new techniques as needed and perfectly willing to jettison received wisdom whenever it was contradicted by new discoveries. Going against prevailing consensus in the field sometimes made her life more difficult, but science was the better for it.”

Known for Dedication to Mentoring

In addition to her incisive scientific mind, Werb was known for her dedication to mentoring younger scientists. Former lab members say she treated students and postdocs like family, inviting them to her home for socializing or for meals, and continuing to follow and support their careers long after they’d left her lab. Werb, who spoke openly about the sexism she faced from mentors and colleagues throughout her career, was a particularly outspoken advocate for women in science. In 2015, she was awarded UCSF’s Lifetime Achievement Award in Mentoring.

“Zena has been my faculty mentor and lab neighbor for the past five years, since I joined the Department of Anatomy as an assistant professor,” said Rushika Perera, PhD. “I spoke with Zena almost daily and had the benefit of observing her insightful and straightforward approach to science and her deep commitment to mentorship and education. Zena took a particular interest in mentoring junior faculty, particularly young women, whom she encouraged and supported by taking practical steps to ensure our success – as well as making sure we were taking care of ourselves on a personal level outside of work. Zena will always be one of the greatest role models I could have ever had, and I am so grateful to have known her.”

“Zena was an extraordinary mentor: smart, critical, supportive and generous. She always gave her lab members the intellectual freedom to pursue big and important questions – she trusted us, even if that meant letting us stumble a bit, because she knew sometimes unexpected detours are necessary to get to the final destination,” said Jonathan Chou, MD, PhD, who was a doctoral student in Werb’s lab from 2008 to 2012. “Zena’s door was always open, and she loved inviting people into her office for a cup of coffee or tea. She often asked how my wife was doing or what fun plans I had for the weekend – if I was working too hard, she would remind me that I was in this great city and to remember to get some fresh air outside. As a season ticket–holder to the symphony, Zena would invite different lab members to join her for concerts – since she knew as students we couldn't afford to eat out much, she would treat us to a wonderful dinner beforehand.”

Her Path to Science

Werb was born in 1945 to Polish-Jewish parents in the Nazi concentration camp at Bergen-Belsen in Germany. After being freed from the camp at the end of the war, Werb’s mother carried her across the Alps to reunite with her father in Italy. From there, the family emigrated to Canada as refugees, settling first in Saskatchewan, and then on a farm in Ontario. Werb showed a passion for math and science from a young age, an interest encouraged by her father. As a student at the University of Toronto, Werb was attracted to geology, but ultimately chose to study biochemistry instead, after learning women could not participate in critical summer fieldwork in geology.

As a graduate student with Zanvil A. Cohn, MD, at Rockefeller University, Werb’s research demonstrated a new role for the immune system’s macrophage cells in helping cells to eliminate excess cholesterol. This work led to an abiding interest in how cells and proteins communicate. Later, as a postdoctoral researcher at Strangeways Research Laboratory in Cambridge, England, Werb studied fibroblasts, collagen-producing cells responsible for building the extracellular matrix (ECM) that holds together all our tissues. Werb’s research revealed that fibroblasts also produce enzymes called matrix metalloproteases (MMPs), which can take the extracellular matrix apart.

After a brief stint at Dartmouth Medical School, Werb took a faculty position at UCSF in 1976 and has been at the University ever since, eventually becoming vice-chair of the Department of Anatomy, a position in which she served for many years. At UCSF, Werb’s continued interest in interactions between cells and proteins led to the fundamental discovery that the ECM is not just a passive scaffold for our tissues, but also communicates directly with cells via intermediary proteins called integrins. Her lab also showed that MMPs’ ability to reshape the ECM gave these little-studied molecules important roles in biological functions as diverse as embryonic implantation, development, and blood-vessel formation.

These discoveries led to seminal work in the 1980s with Mina Bissell, PhD, at Lawrence Berkeley National Laboratory, which revealed that some MMPs can promote tumor formation and play a role in metastasis by releasing tumors from the constraints of the ECM. “These insights led a lot of people to try to develop MMP inhibitors to fight cancer, but Zena argued that the biology was more complicated: some MMPs would likely promote cancer while others would protect against malignancy,” Weaver said. “This didn’t make her very popular in some quarters, but Zena understood that cancer is complex, a consequence of the beautiful orchestration of tissue development gone awry. When MMP inhibitors failed, it hurt Zena’s ability to get funding and high-level publications in this area. But she wasn’t one to be daunted – she just carried on and continued doing the work.”

Werb’s early interest in the immune system also came full circle in a long-standing collaboration with Lisa Coussens, PhD, at Oregon Health and Science University beginning in the 1990s, which identified inflammation as a key feature of cancer. Another indicator of the importance of the tumor “microenvironment” on cancer outcomes, this work has helped inform the recent development of cancer immunotherapies.

Werb’s work has continued to focus on understanding breast cancer metastasis in the context of normal breast development and cancer’s local environment, including developing new approaches to identifying metastatic cancers and potentially halting their spread. Werb showed clear parallels between how the innate immune system regulates the growth of the mammary glands during adolescence and how these immune cells contribute to either inhibiting or promoting breast cancer malignancy, which Werb saw as a kind of perversion of normal development.

“We have lost an icon – an original, fearless voice in science and a generous and brilliant collaborator,” Weaver said. “But most of all we have lost a very dear friend.”