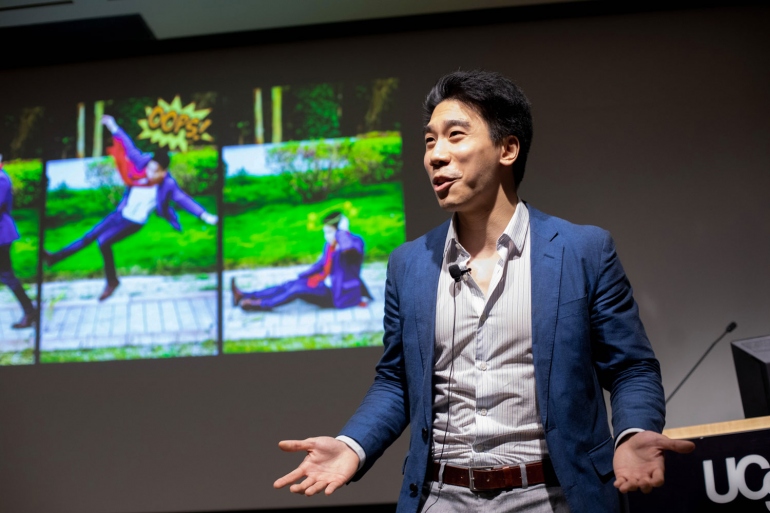 Last year, a million Americans went to the emergency room after falling and hitting their heads. Many were sent home with undiagnosed brain injuries because no reliable test exists for concussions. What would it take to invent a blood test – like the one that 20 years ago changed the way we diagnose heart attacks – that could diagnose concussions?

David Wu, a graduate student in UC San Francisco’s Biomedical Science Program, is developing just such a blood test and his talk on this work took the top prize in this year’s UCSF Grad Slam.

Watch the full event here, or catch the winning presentationat the bottom of the page.

He was among the 10 finalists in the fifth annual Grad Slam, held March 21, competing to inform and entertain with three-minute talks based on their own research. Their talks offered tantalizing glimpses into a wide-range of science, from programming yeast with light, to fixing mutations that weaken tooth enamel, to understanding how the brain adjusts the pitch of our speech.

The live event was held in front of an enthusiastic audience in Byers Auditorium and live-streamed to Parnassus. Both audiences voted for the “People’s Choice” winner.

Wu, who is an MD/PhD student in the Medical Scientist Training Program, took home the $4,000 first-place prize with his talk, “A Blood Test to Uncover Concussion,” on research he is conducting with Daniel Lim, MD, PhD, and Geoffrey Manley, MD, PhD. Their project is supported by a UCSF Weill Innovation Award. Wu impressed the judges with an engaging talk, and well-timed humor, that brought attention to an under-recognized condition.

After all, said Wu, “Anyone can get a concussion – you don’t have to play for UCSF football.”

“When people ask me about what I do, I love telling them about this project,” Wu said after the awards were announced. “I realized this competition is like that, it’s a way of sharing this excitement we have for science and the research that can impact the world.”

He hoped people would remember that concussions are common and can be serious, he said. “Like a lot of medical illnesses, we don’t always have the best tools right now to pick up concussions. Hopefully, one day, we can empower doctors with a tool that can let them do more.” 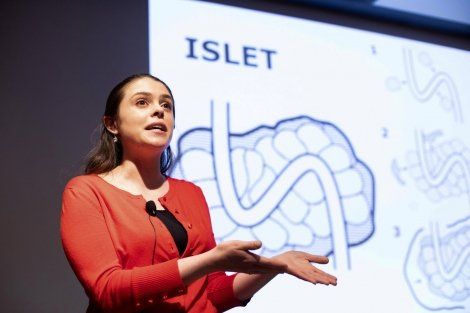 Wu will go on to represent UCSF at the system-wide Grad Slam event on May 10.

Second place, with a prize of $2,000, went to Olivia Creasey, a graduate student in the Bioengineering program and a Byers Family Discovery Fellow, for her talk, “An Instruction Manual for Islet Assembly.” Creasey described her research building islet tissue in the lab, which may eventually be used for transplants to cure diabetes. Turning cells into functional tissue is like assembling furniture, she said, not only do you need the right parts, you need the right structure.

Creasey said she wanted to convey that even basic research that seems esoteric can have valuable implications for helping patients. “Because scientists spend most of their waking hours talking to other scientists, it can be difficult to remember that the majority of the population does not spend 10 hours a day thinking about science,” she said after the competition. Grad Slam challenged her to talk about her research in a way that would appeal to someone “who hasn’t had reason to think about cells since a high school biology class.” 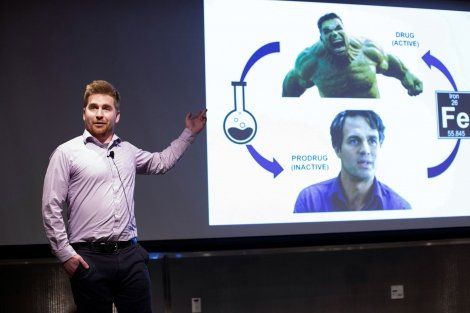 Third place and "People's Choice" were awarded to Ryan Muir for his talk, "Ironing Out Antibacterial Resistance."

Ryan Muir, a graduate student in the Chemistry & Chemical Biology program, won both the third place spot (a new award this year), with a prize of $1,000, and the “People’s Choice” award, with a prize of $750. His talk, “Ironing Out Antibacterial Resistance,” evoked a superhero metaphor to describe the development of powerful antibiotics that could fight resistant bacteria without hurting the body’s cells. He said the goal is to create an antibiotic version of The Hulk, which would be triggered only inside harmful bacteria, “leaving civilians out of it.”

Muir tested iterations of his talk on his family of non-scientists. “I had a couple different metaphors and The Hulk was the resounding success out of all of them,” Muir said after the competition.

He said antibiotic resistance is a problem that needs more attention. “While we still have some things in our arsenal, a lot more effort should be put into the problem or else the future may not be super bright.”

The other finalists in the live competition were:

The finalists were selected by a panel of screening judges from entries submitted by video. 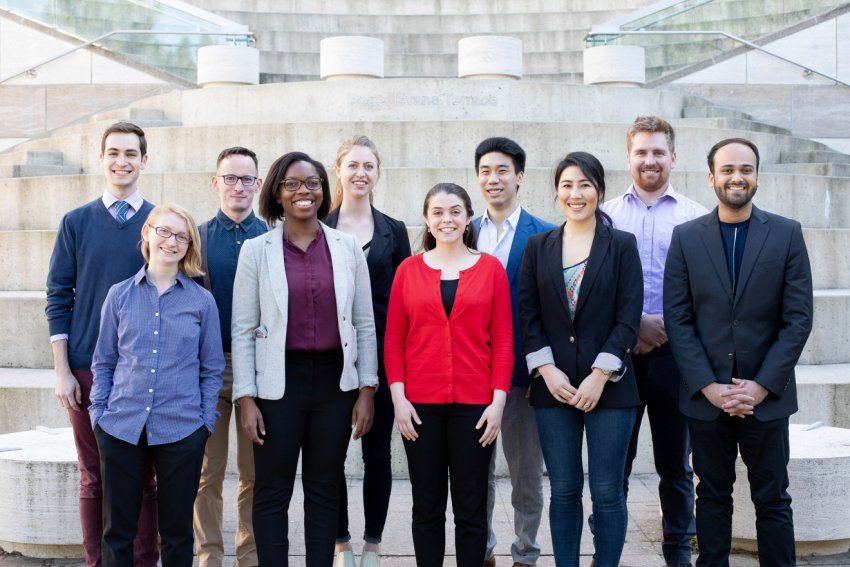 “The presenters were just so impressive, so poised, so polished, and working on really interesting projects,” said Criswell. “We had a really tough time choosing our top three.” In the end, she said, the winners were the ones best able to “strike the right balance” – sharing the interesting aspects of their science without introducing too much technical jargon.

Elizabeth Watkins, PhD, dean of the Graduate Division and vice chancellor of Student Academic Affairs emceed the competition. She said she wanted to encourage all graduate students to the enter the Grad Slam competition. “It’s an excellent opportunity to hone your presentation skills,” she said. “And this three-minute presentation can be used in job interviews, it can be used at cocktail parties and to start conversations on the MUNI. It can be used to tell your grandparents what you do. So it will serve you well in the years to come.”

For more campus news and resources, visit Pulse of UCSF.