By Jen A. Miller

There is a big, global problem: viruses such as HIV and COVID-19 mutate, but treatments for them don’t.

For more than 20 years, Leor Weinberger, PhD, has been thinking about how to make vaccines work more efficiently by being adaptive, rather than static. 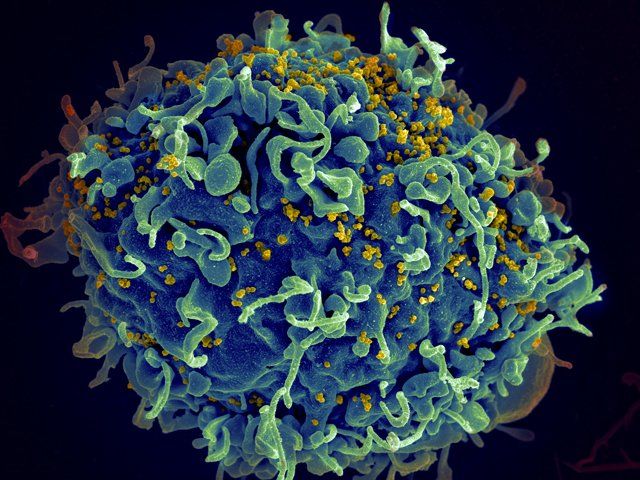 A human T cell (blue) is under attack by HIV (yellow), the virus that causes AIDS. Image by NIH

“We’re fighting biology with chemistry,” said Weinberger, director of the Gladstone Center for Cell Circuitry and a professor in the Departments of Pharmaceutical Chemistry and Biochemistry and Biophysics at UC San Francisco. “Biology is dynamic, so it evolves. It transmits. Chemistry does neither of those things. It’s static.”

Up until last year, Weinberger’s work primarily focused on HIV, a virus that continues to infect nearly 2 million people a year worldwide, despite anti-retroviral treatments. He praises these drugs as “a miracle of modern medicine,” and they work well in individuals, but don’t have success on a population scale because they need to be taken daily, for life. So-called super spreaders, the 20 percent of the population that drives 80 percent of infections, can also be hard to reach as often they’re maligned and stigmatized sex workers or injection drug users. They’re less likely to have access to these life-saving drugs, and even if they did, those treatments don’t prevent infections from taking hold.

The antivirals mostly are defensive – taken once a person is infected by the virus. Efforts to create a vaccine for HIV have been elusive since the virus mutates rapidly. Though slower in its rate, COVID-19 can also mutate, which already is making vaccines less effective against some strains, and why as the virus continues to evolve, it holds the potential to escape current vaccines entirely.

For Weinberger, the William and Ute Bowes Distinguished Professor, the idea is to avoid fighting viruses from a defensive position. He has developed Therapeutic Interfering Particles (TIPs) that go on offense. They do this by “hijacking the hijackers,” he said.

Viruses proliferate because they infect cells, use those cell’s resources to create more of themselves, and then go forth and infect more cells, over and over and over again, spreading inside one’s own body until there is enough virus in the body to infect other people.

TIPs are engineered mutants of the virus themselves, little snippets of similar DNA. They outcompete the virus for replicating material, so instead of spreading the virus, the virus spreads the harmless mutant. As the TIPs spread, the virus fails to replicate further, decreasing the viral load.