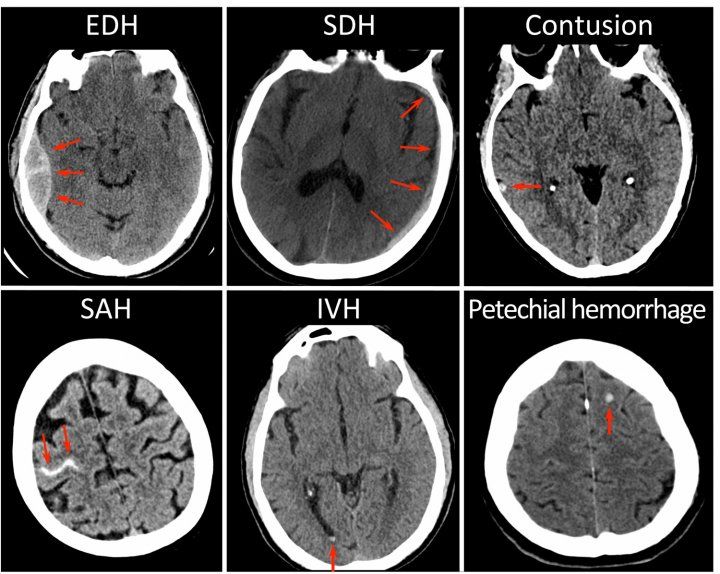 CT features like these can provide clues about concussion recovery. Image credit: UCSF

CT scans for patients with concussion provide critical information about their risk for long-term impairment and potential to make a complete recovery – findings that underscore the need for physician follow-up.

In a study led by UC San Francisco, researchers looked at the CT scans of 1,935 patients, ages 17 and over, whose neurological exams met criteria for concussion, or mild traumatic brain injury (TBI), at hospitals throughout the nation. While links between CT imaging features and outcome have already been established in moderate and severe TBI, the researchers believe this is the first time the link has been identified in patients with concussion, disputing earlier research that found no prognostic significance of specific types of CT abnormalities.

“Radiologists who routinely read trauma scans know intuitively that patterns of intracranial injury on CT are not random,” said first author, Esther Yuh, MD, PhD, of the UCSF Department of Radiology and Biomedical Imaging. “We showed there are patterns of injury, that some of these are associated with worse outcome than others, and that they provide a window into mechanisms of injury that is reproducible across large studies.”

The study appears online in JAMA Neurology on July 19, 2021.

“Although concussions are referred to as mild traumatic brain injuries, there is nothing mild about some concussions,” said senior author Geoffrey Manley, MD, PhD, professor and vice chair of neurological surgery at UCSF and chief of neurosurgery at Zuckerberg San Francisco General Hospital. “Patients with concussion may suffer from prolonged headache, poor sleep and impaired concentration, and they are at higher risk of self-medicating with drugs and alcohol. Concussion can also contribute to depression and anxiety, and increase the risk for suicide. We need to view concussion not as an event but as a disease requiring physician follow-up after a patient is discharged from the hospital.”

The participants were enrolled by the brain injury research initiative TRACK-TBI, of which Manley is the principal investigator. To enrich the number of so-called complicated concussions, the researchers drew exclusively from patients who had been seen at hospitals with level 1 trauma centers. This meant 37 percent of study participants had a positive CT, significantly more than the 9 percent of positive CTs from patients in U.S. emergency departments.

Baseball Whacks May Have Better Outcomes than Other Injuries

The most common patterns of injury, affecting more than half of CT-positive patients, were combinations of subarachnoid hemorrhage (SAH), subdural hematoma (SDH), and/or contusion, which may be caused by injuries such as falls from standing. Approximately 7 percent had intraventricular hemorrhage (IVH) or petechial hemorrhage, caused by rotation of the head, occurring in some sporting, scooter and automobile accidents; and 5 percent were found to have epidural hematoma (EDH) in which blood accumulates between the skull and the membrane covering the brain, often seen in sports injuries such as being hit with a baseball.

The patients, whose average age was 41 and of whom 66 percent were male, were assessed at two weeks, and at three-, six- and 12 months following injury. The researchers found that patients in the SAH/SDH/contusion group failed to make a complete recovery at 12 months post-injury and had impairments across the outcome spectrum, from mild to more severe.

Patients in the IVH/petechial hemorrhage group tended toward more severe impairments, in the lower-moderate disability range, a level that potentially affects multiple areas of function, such as employment, social and leisure activities, up to 12 months post-injury. Patients with the EDH phenotype fared significantly better and demonstrated complete recovery by their six-month assessment.

Results of the study were validated by CENTER-TBI, a parallel brain injury research group that had enrolled 2,594 participants at European trauma centers. “The confirmation of the findings in an independent cohort confirms the fidelity of our results,” said Manley, adding that patients with EDH were one exception. CENTER-TBI found their incomplete recovery lingered for months longer than those patients followed by TRACK-TBI, but more severe outcomes were not seen at any point in either study.

The researchers noted that even among concussion patients who had a positive CT scan, just 39 percent receive follow-up care, including simple interventions like providing educational material at discharge. Follow-up should be routine for all 5 million concussion patients seen annually in the nation’s emergency departments, including those without abnormal CT features, who would have milder symptoms and more complete recoveries, they said.

The researchers cautioned that these results should not be interpreted as a call to increase the use of CT, which exposes patients to radiation and increases cancer risk. Currently CTs are recommended for patients with a known or suspected concussion and loss of consciousness or amnesia and/or factors like older age, evidence of physical trauma and severe headache.

In fact, CTs may become less widely used with the recent approval by the Food and Drug Administration of a rapid hand-held blood test that Manley found was more sensitive than CT in detecting concussion. The blood test measures biomarkers associated with TBI, which were close to 52 times higher in concussion patients than in healthy participants when verified by MRI, a more definitive but costlier and less accessible scan than CT.

In addition to challenging the belief that CT features in concussion are not relevant, the researchers are also challenging the idea that concussion is “what the patient brings to the injury,” said Manley, who is also affiliated with the UCSF Weill Institute for Neurosciences. “In moderate and severe TBI, it is anecdotally taught that outcome is determined by ‘what the injury brings to the patient,’ while concussion is determined by baseline characteristics like age, sex and years of education. While the study confirms the importance of these characteristics, we show that in some concussion cases, poor outcomes are also attributed to ‘what the injury brings to the patient.’”

TBI can lead to a wide range of outcomes, from minor effects to severe, life-changing symptoms, said Nsini Umoh, PhD, program director at the NIH’s National Institute of Neurological Disorders and Stroke (NINDS). “The ability to anticipate outcomes may help clinicians provide more targeted and appropriate follow-up care for patients with head injury.”

Authors: For a full list of authors and disclosures, please see the published study.