Plenty of probiotic yogurts, pickles and kombuchas claim to boost our digestive health with armies of microbes, but some scientists have more ambitious therapeutic plans for the “bugs” that colonize us. They hope to leverage these microbes as living therapeutics for a range of health conditions, including ulcerative colitis, multiple sclerosis, eczema, and asthma.

UCSF launched a Living Therapeutics Initiative to accelerate the development and delivery of revolutionary treatments.

Our guts, skin and other regions of the body harbor trillions of microbes, as many as we have cells of our own. Each of these microbes – bacteria, viruses, microscopic fungi and others – that make up the human microbiome brings with it a unique genome.

The composition of our microbiome – and its microbial pan-genome – is shaped by diet and environment, which in turn affect its important influences on human physiology, from digestion to brain health to immune function.

“One real advantage of the microbiome is that it’s a dynamic system,” said Susan Lynch, PhD, professor of gastroenterology and director of the UCSF Benioff Center for Microbiome Medicine. “What we’re thinking about is how we can leverage microbes in engineering that system to improve health or prevent disease.”

Much of the clinical research on the microbiome revolves around its connection with autoimmune disorders, such as rheumatoid arthritis, Crohn’s disease and multiple sclerosis (MS), which altogether affect 24 million Americans. While genetics factor into why some people develop autoimmune disorders, environmental triggers likely contribute, said Sergio Baranzini, PhD, a neurology professor at the UCSF Weill Institute for Neurosciences, who studies the genetics and immunology of MS.

“This is where we turn to the microbiome,” he said. “Because it is so influenced by food and other environmental factors, it’s a proxy for the environment.”

A decade ago, when rapid DNA sequencing techniques made it cost-effective to identify bacteria, Baranzini began studying the relationship between the gut microbiome and MS, an autoimmune disorder in which the immune system attacks the nervous system. He had been intrigued by reports of other autoimmune conditions in which patients and controls were found to have different gut microbes.

In fact, most of our immune cells reside in our gut, and they depend on short-chain fatty acids produced when gut bacteria digest dietary fiber.

Baranzini compared stool and blood samples from people with MS to those from a member of the same household without MS. He found that the two populations of gut bacteria indeed differed, and that the blood from the person with MS had considerably fewer regulatory T cells, which normally tamp down the body’s immune response.

The deficiency of these T cells, Baranzini hypothesizes, is likely tied to the microbiome and impairs the body’s ability to control inflammation. He launched the International MS Microbiome Study to seek a comprehensive picture of gut microbiota in people with MS. 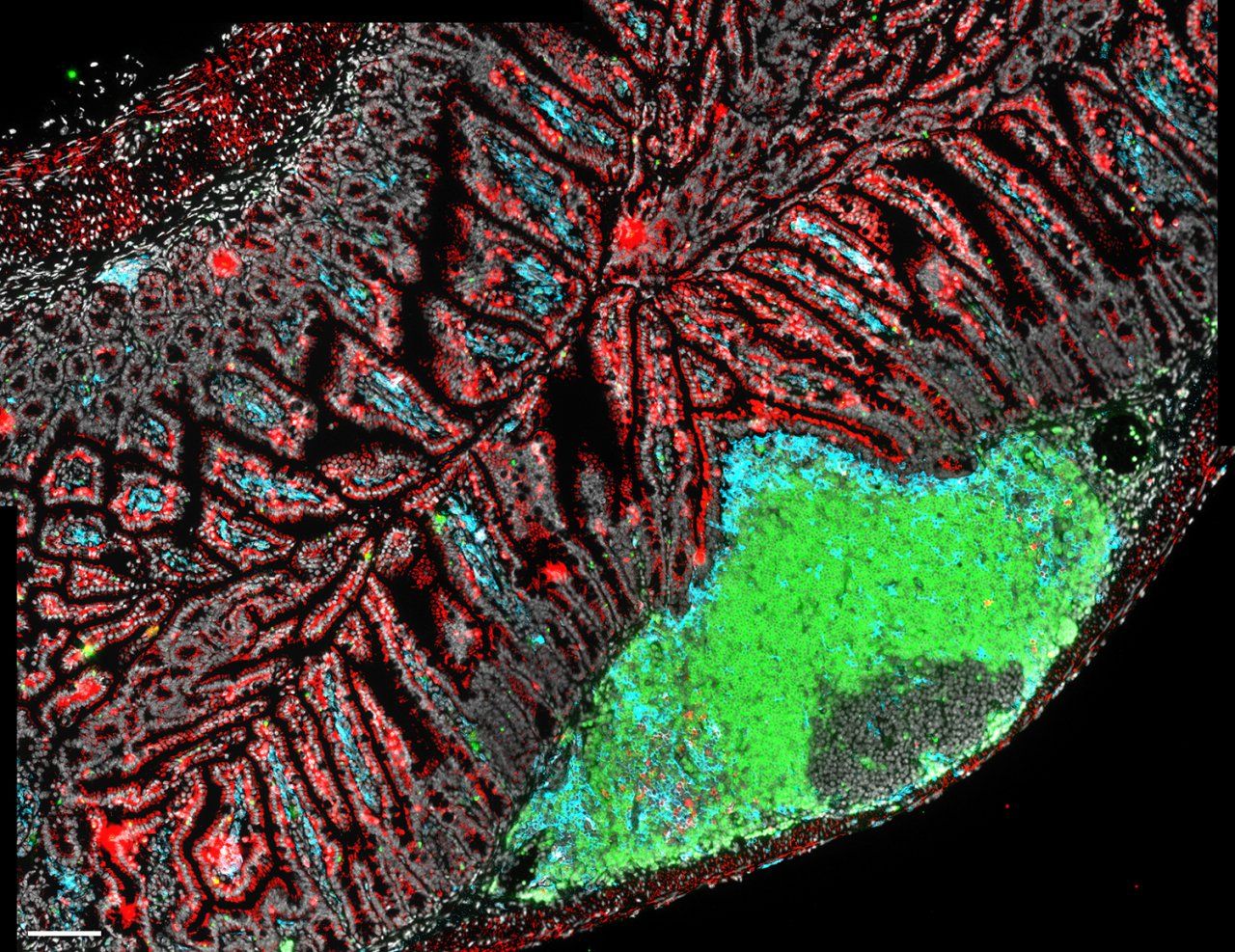 B cells (green), dendritic cells (blue) and T cells (red) are immune cells that help maintain the delicate relationship between the gut microbiome and the host. Image by Lauren Rodda

“We’ve started discovering how diverse our microbiota are and how intimately they are in contact with our own immune systems,” he said. “And we now know that there’s a lot of back-and-forth between the immune system and cells in the intestine that we’re only beginning to understand.”

Microbial therapies for autoimmune disorders already exist in the form of fecal microbial transplants, or FMT, which involves taking stool samples from healthy individuals, isolating the gut microbes, and giving them to patients via a pill or enema.

This past April, Najwa El-Nachef, MD, an associate professor of medicine, wrapped up a clinical trial for ulcerative colitis and found that some patients respond much better to FMT than others, with a few reporting improvements in inflammatory skin and joint conditions as well. Her next step is to identify the best patients for microbiota-based therapy and to develop more targeted treatments.

“For a subset of ulcerative colitis patients, manipulating the microbiome may provide a way to treat their autoimmune disease without suppressing their immune system,” she said.

Our microbiome begins to take shape early, so interventions at the start of life can set the stage for future health. Lynch has focused some of her research on the gut microbiota during a baby’s first months of development. It’s a critical time when the composition of the baby’s microbiome, influenced by the mother and the environment, can affect the development of the immune system and immune memory, with lasting consequences.

Susan Lynch, PhD, is the director of the UCSF Benioff Center for Microbiome Medicine. Photo by Barbara Ries 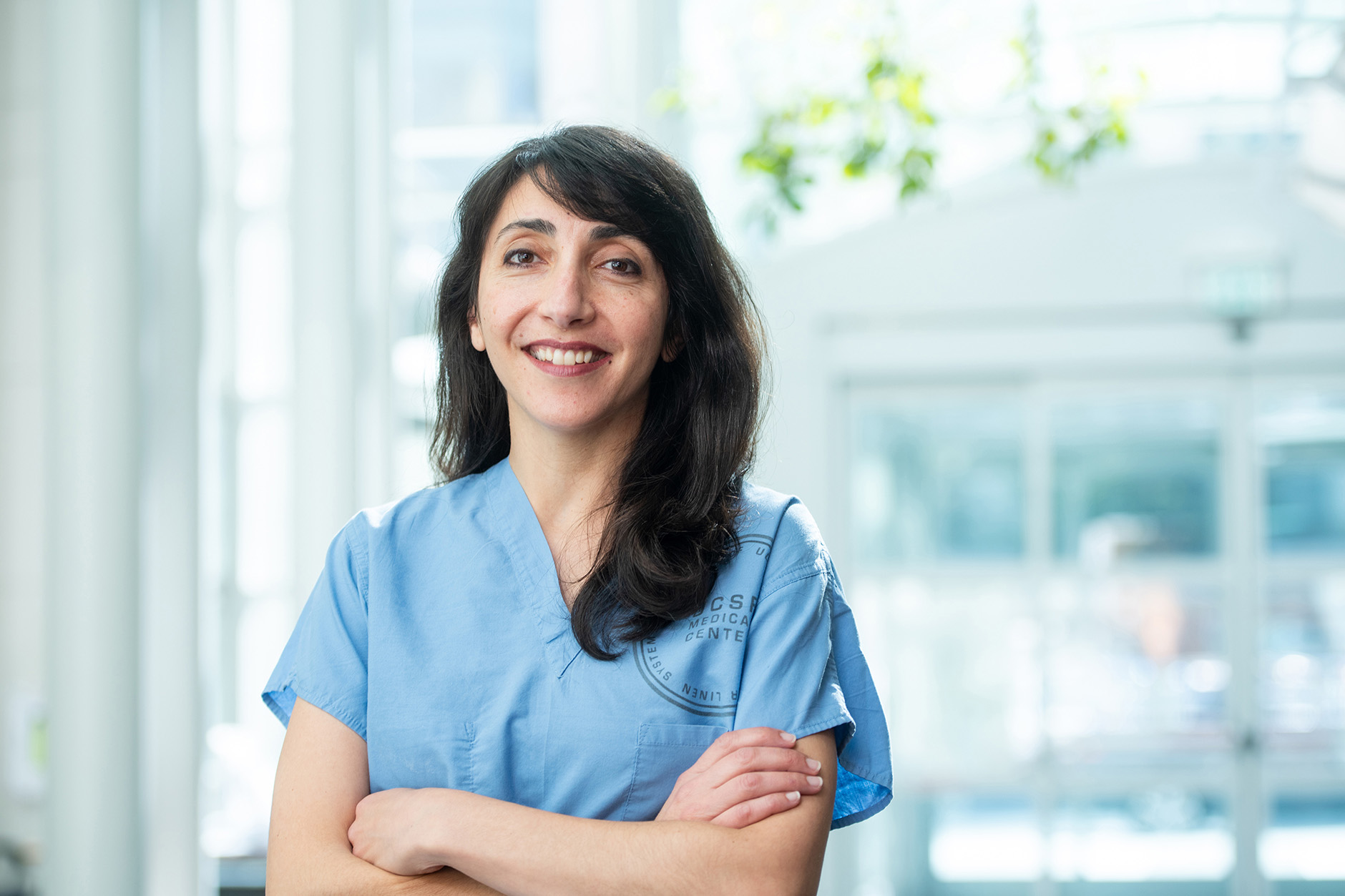 Najwa El-Nachef, MD, is studying the role of the microbiome in treating ulcerative colitis. Photo by Barbara Ries

“We’ve found that the gut microbiome at one month of age really predicts the risk of developing asthma and airway disease later in childhood,” she said. Lynch and her team have identified specific microbial products that drive the dysfunction of regulatory T cells, which is associated with subsequent disease.

“We’ve considered that engineering the gut microbiome during this key window of immune training could have a long-term beneficial impact on the health status of high-risk children,” she said

Lynch has developed a live microbial intervention administered at birth to babies at high-risk for asthma, comprised of bacteria that can modulate immune response. Their bacterial genomes encode a range of functions consistently absent from high-risk infant gut microbiomes.

The idea is to shape the developing gut microbiome by providing bacteria that can train the immune system early in life with their microbial products and metabolites, ultimately influencing the microbiome’s function in the long term.

Not Just the Gut

Our skin harbors its own set of microbes that interact with immune cells and protect the skin from infection.

Clinical trials using skin microbiota are already showing promise for patients with eczema, an autoimmune condition that can flare up when staph bacteria proliferate, said Tiffany Scharschmidt, MD, an associate professor of dermatology. The trials involve supplementing the bacteria that ordinarily keep the staph population under control. 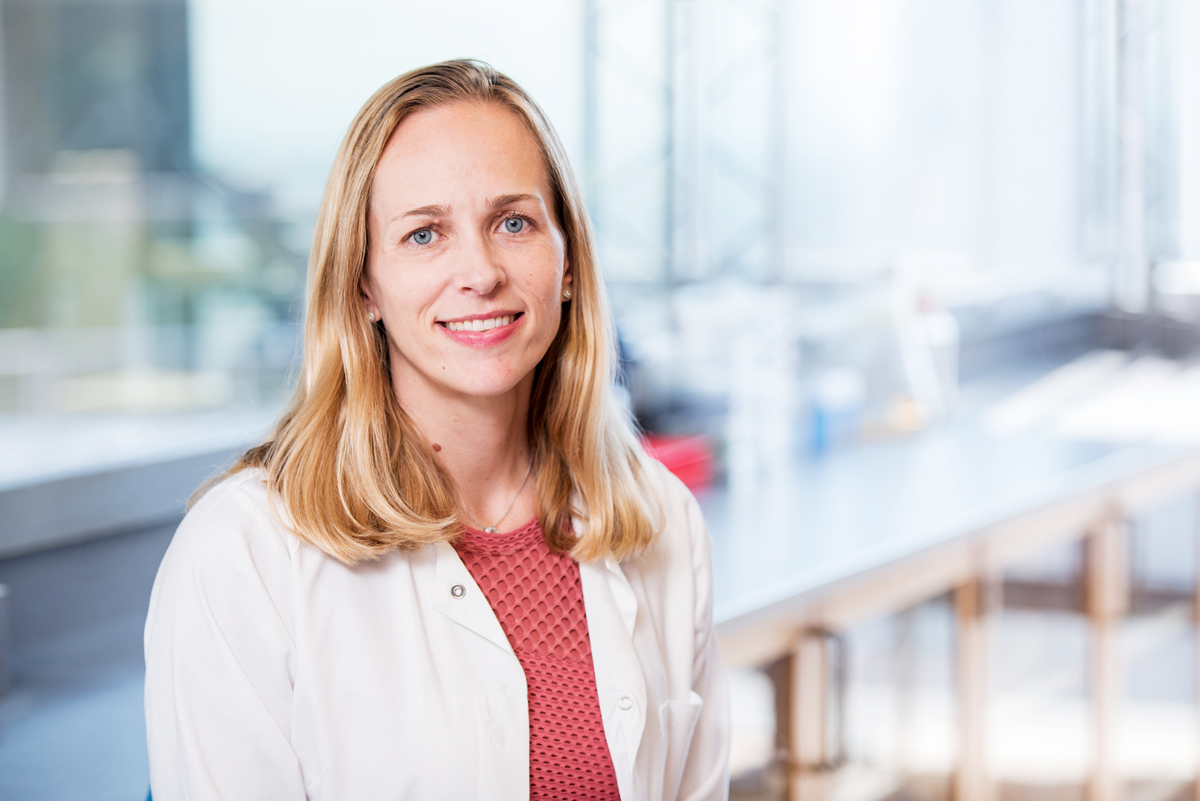 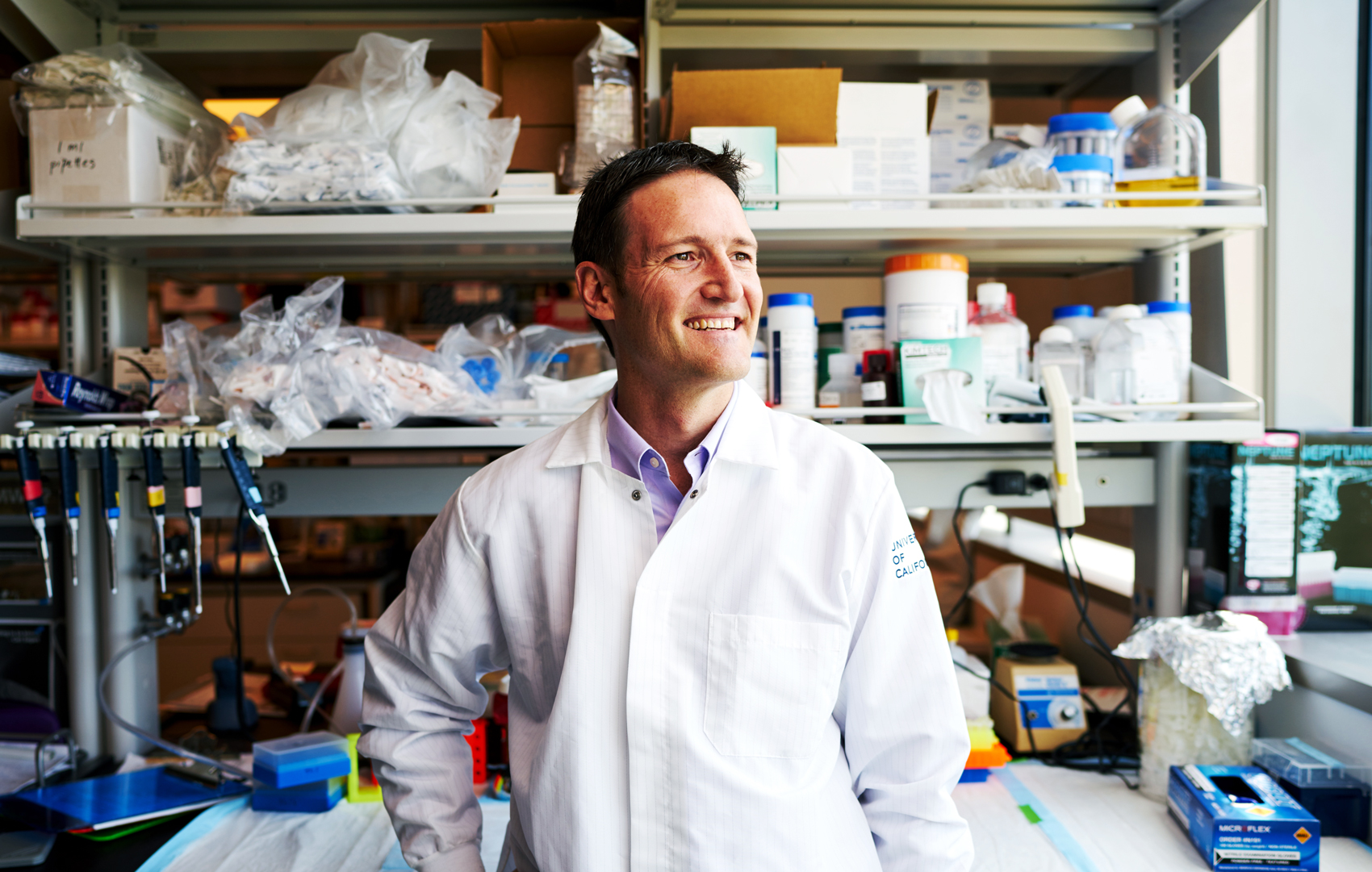 Sergio Baranzini, PhD, is studying he genetics and immunology of multiple sclerosis. Photo by Steve Babuljak

“As we gain more understanding of the interaction between the skin microbiome and its immune system, we’ll see other microbial-based treatments emerging,” she said. In the future, therapeutic skin microbes could even be genetically engineered to produce needed compounds.

The gut microbiome is, of course, intimately tied with digestion, producing diet-derived compounds that program immune cells and produce nutrients critical for the growth of the cells that line our intestines. “The basic digestive and immune functions in our gut depend on colonization by specific bacteria,” said Peter Turnbaugh, PhD, an associate professor of microbiology and immunology. “Our intestinal cells have evolved receptors just lying in wait to sense the chemicals produced by the gut microbiome.”

Turnbaugh has found that our inner critters also play a role in metabolizing medication. A better understanding of that role, he said, could increase drug efficacy.

“We think the microbiome might be second only to the liver in determining how drugs are metabolized in the body, affecting how a patient responds to an existing therapy,” he said.

Some antibiotics, for example, are activated by enzymes produced by the gut microbiota. Our microbial tenants may even influence how substances move around the body or change a drug’s mechanism of action, but much remains unexplored in this area, said Turnbaugh.

Deeper knowledge of how our gut microbiome interacts with drugs might enable physicians to prescribe treatments that align with – or supplement – our individual microbiome, a new form of   precision medicine.

“Though the human microbiome field is still relatively young, it has already provided exceptional insights into the dependence of human physiology on our dynamic microbial inhabitants and offers a new set of tools to elicit better health,” said Lynch. “Translating these early observations into new live biotherapeutics represents the next step in realizing the potential of this field”.