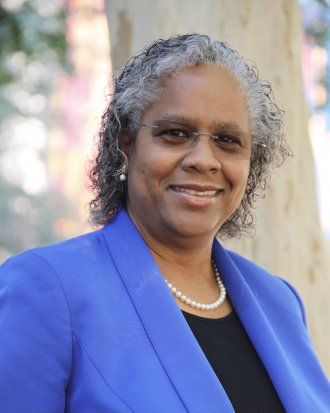 Nicquet Blake, PhD, one of the nation’s leading academic voices on issues of equity and diversity, is joining UC San Francisco as vice provost of Student Academic Affairs and dean of the Graduate Division.

Blake most recently served as senior associate dean for Admissions and Student Affairs in the Graduate School of Biomedical Sciences at the UT Health San Antonio, where she was the chief student affairs officer and oversaw the admissions process for all 20 programs of the graduate school.

A neuroscientist by training, Blake has devoted her career to, in her words, “implementing transformational changes to diversify the academy.” In 14 years at UT Health San Antonio, part of the University of Texas system, she developed systems that allow underrepresented students to be vested and valued in the community, reversing a legacy that saw 40 percent attrition rates of underrepresented students after only their first year.

“We’ve been very impressed by her creative thinking about new approaches for graduate student education, and equally so by how strongly she has advocated for graduate students from diverse backgrounds,” Lowenstein said. “She has put programs in place at UT Health San Antonio that have had a major impact on the support and outcomes of students who have been recruited.”

Blake also has amassed a record of success developing a robust array of student affairs functions at UT Health San Antonio which, alongside her accomplishments in graduate education, made her a clear leader in the search for someone to lead both areas.

In leading Student Academic Affairs and the Graduate Division, Blake sees the opportunity to continue her work making sure decisions are made with students’ best interests in mind.

“I am first and foremost an unapologetically fierce student advocate who is vested in teaching students to be their best self-advocates,” she said.

Blake remembers well her own student days that led her into advocacy.

A native of Jamaica, Blake married her childhood next-door neighbor, a military man who had immigrated to Texas and was serving in the U.S. Air Force. Her planned career as a teacher evolved as she moved through school, first earning bachelor’s and master’s degrees in biology at UT San Antonio and then a doctorate in neuroscience at Washington University in St. Louis.

At “Wash U,” Blake joined the steering committee for postdocs and advocated for standardization of postdoc salaries. She enjoyed the policy work and a new career was born. As she moved into administrative posts, she continued to keep students from underrepresented groups in mind.

At UT Health San Antonio, Blake established and expanded mentoring programs that helped recruit students from underrepresented minority groups to the institution, whose student body did not reflect the city’s dominant Hispanic population. But it wasn’t enough for them to survive, she said: she wanted them to thrive.

Within a few years, underrepresented students were flourishing, winning some of the university’s top overall awards. Blake also swelled with pride in recounting how students served the community and looked out for each other, particularly during the “snowpocalypse” that hit Texas last winter.

Blake said she, like so many others, has had to fight racism throughout her career.

“I have encountered many instances of racism in my journey,” Blake said. Asked to share an example, she said: “Once when I was in the restroom, a woman came in and said, ‘Hey, do you have any toilet paper?’ I thought, ‘What would make her think that I, of everybody else, would be the person to ask for toilet paper?’ I said, ‘Let me check on that for you.’ I walked out the door and never came back.”

Blake chuckled at the memory. “I like a little humor in life,” she said.

With UCSF Chancellor Sam Hawgood, MBBS, declaring diversity, equity and inclusion as one of his top priorities, including work to end health care disparities, Blake and her highly effective team will play an integral role in its ongoing success.

“I'm very excited about Nicquet Blake joining our campus,” said Renee Navarro, MD, PharmD, vice chancellor of Diversity and Outreach. “She is an established national leader in issues of equity and diversity, and I am really looking forward to partnering with her to elevate the work that we're doing at UCSF.”

A History of Impact for Underrepresented Youth

In addition to her work in medical science, Blake is the mother of two sons, ages 22 and 19, who are both accomplished soccer players. A passionate community advocate, Blake and her husband created a youth soccer team in San Antonio where most of the players came from economically disadvantaged backgrounds, giving them access to coaching they might not otherwise have received.

In lieu of payments, they required the students to come to practice and to earn good grades. Within three years, their team won an improbable state championship.

“Soccer is a beautiful sport,” Blake said. “We were able to take a group of ordinary kids that competitive teams largely ignored, get them to work as a team, get them to really care about academics, and at the same time win a state championship. How cool is that?”

Even better, she recently saw one of the team’s alumni, who initially didn’t care about school at all. He graduated from high school with honors and is off to college this fall.

“None of that would have happened without this encounter with this specific group of boys,” she said. “There is no greater joy than seeing lives transformed through the beautiful game of soccer.”

When Elizabeth Watkins, PhD, left UCSF after 17 years to become provost and executive vice chancellor of UC Riverside, her roles in the Graduate Division and in Student Academic Affairs were split on an interim basis between the next level of leadership to oversee the joint operations. Elizabeth Silva, PhD, associate dean for graduate programs, became interim dean of the Graduate Division, and Bill Lindstaedt, MS, assistant vice chancellor of Career Advancement, International and Postdoctoral Services, served as interim vice chancellor of Student Academic Affairs.

“Liz Silva and I are excited to welcome Dr. Blake to the Graduate Division and Student Academic Affairs,” Lindstaedt said. “We look forward to supporting her success as she takes the helm in this influential dual role.”

Blake will join Chancellor Hawgood’s cabinet, which consists of the deans of the four professional schools – dentistry, medicine, nursing and pharmacy – as well as the UCSF Health chief executive officer, vice chancellors and other University leaders.

Student Academic Affairs offers a broad range of services that support learner needs from physical and mental health to financial aid and the Student Food Market, and from student involvement to career development. These programs serve all UCSF students and scholars, including postdoctoral fellows, and provide an institutional focal point for groups of learners such as first-generation and international students, as well as veterans and those with disabilities. SAA’s Educational Technology Services proved particularly vital in the COVID-19 pandemic as learning moved online.