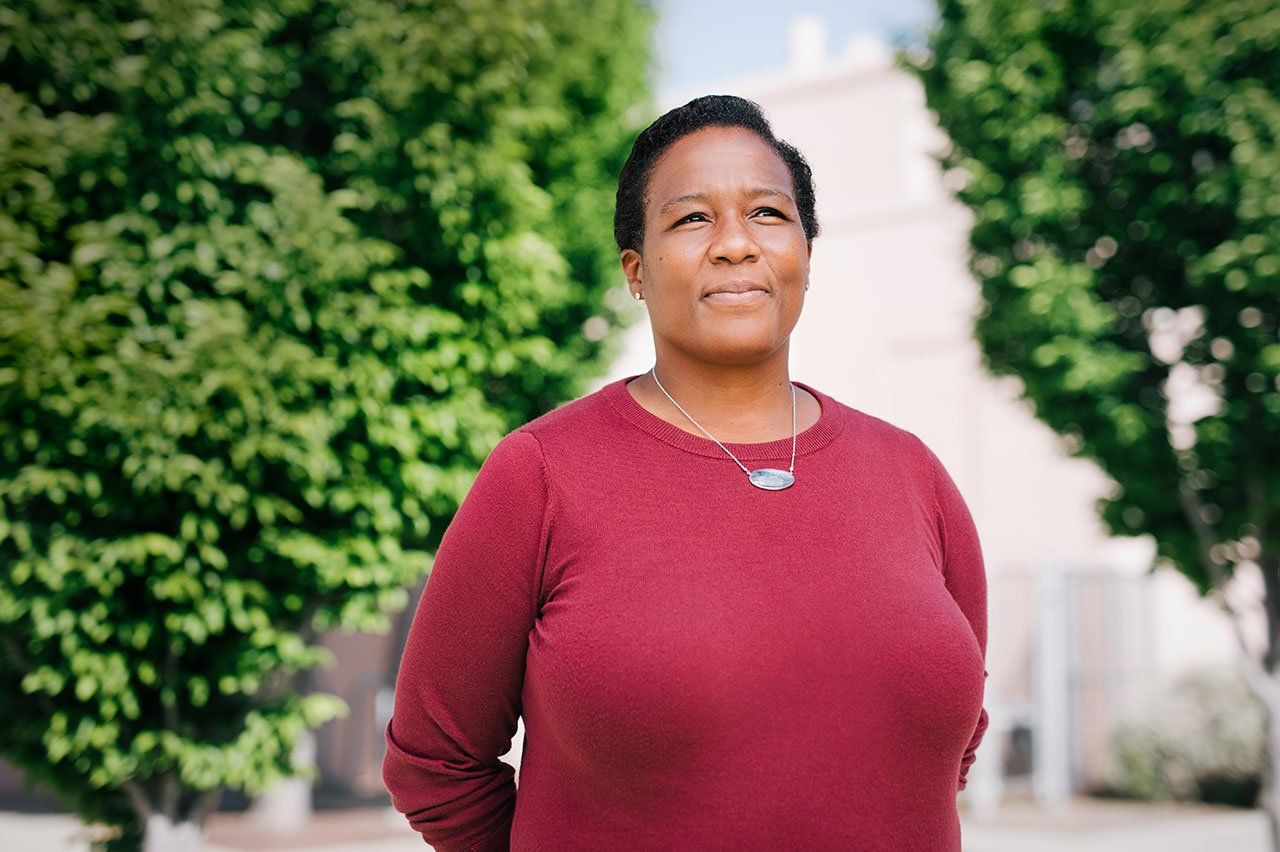 Health-services researcher Kim Rhoads, MD, MPH, founded Umoja Health Partners to unite about 30 community organizations combating COVID-19 in Black communities in the Bay Area. She shares why the Umoja approach (the organization’s name comes from the Swahili word for “unity” or “oneness”) is working.

Something one of our community leaders said really captures it: “You can’t teach what you don’t know, and you can’t lead where you won’t go.”

You point to sources for Black distrust of the medical establishment beyond the often-cited Tuskegee experiment – for example, the so-called “chest pain while Black” 2010 study documenting disparate cardiology interventions and your own research exposing differential cancer treatments.

Yes. Also, pulse oximeters, which measure oxygen levels, were recently found to give unreliable readings for people with darker skin.

How are these issues connected?

They seem disparate, but they all come under one umbrella, which is that our agenda – as health care institutions, as academic institutions, as public health organizations – does not align with the agenda of Black people, and it never really has. That underpins why Tuskegee was allowed to go on and on: because that agenda is the preservation of the health of white people.

That agenda sort of includes Black people: “Whatever we build, it’s generic, it’s for you.” It’s not, though, because it doesn’t take into account the history of Black people in this country, the ways in which we’ve been dispersed and displaced and othered.

We need to go further and understand that the Centers for Disease Control was formed in 1946, as a new branch of the U.S. Public Health Service, to manage three diseases, and syphilis was one of them. So the problem with the Tuskegee experiment goes beyond the fact that a government study tricked Black people and allowed them to remain sick; it’s actually that our federal-level public health institution is founded, in part, on that study. That part of the Tuskegee story doesn’t get told. That’s in the soil from which everything else grows in public health.

So lack of trust should be thought of as an expected response to historically untrustworthy behavior. 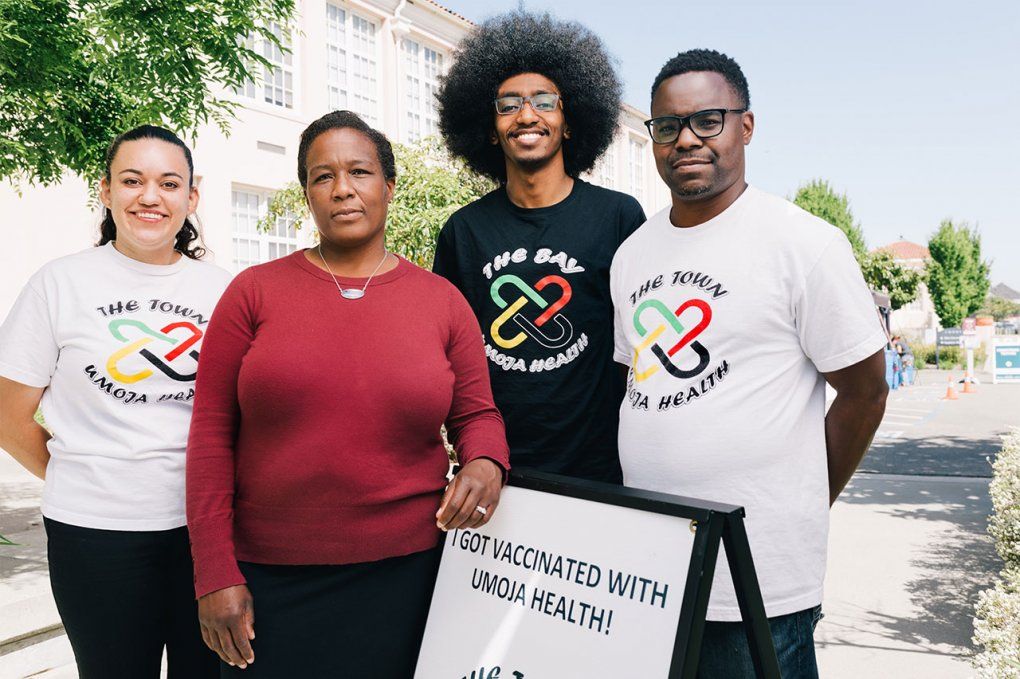 How does Umoja address this deep history?

We’re very intentional about going to places where our partners say Black people will come. Everything is for us, by us – our materials are created by community members; our mobilizers are local or from partner churches. Our tents are red, green, and black. We are signaling so loudly: This is for Black people. Yes, other people can come, but, Black people, this was actually created for you.

We also emphasize an ongoing relationship. Every week we share our data in real time, and we give the community an opportunity to comment on it. We post the data publicly – we don’t embargo it while waiting for publication. Our agenda isn’t necessarily the academic agenda; it’s the public health agenda – for the African American community.

Why is it important to have separate efforts targeting Black and Latinx people?

“Black” and “brown” are often conflated, but the epidemiology of COVID is different in these two communities. The Latinx story is about infection. The African American story is about death. Yes, Latinx people are dying, but if you look at Alameda County’s case fatality rates for Black people who get COVID, their risk of dying is up to four times higher than it is for Latinx people who get COVID.

Umoja started with testing and added vaccination. How’s it going?

It’s going gangbusters. At our first big vaccine pop-up, our turnout was amazing – and over 60% African American; the line was around the corner. 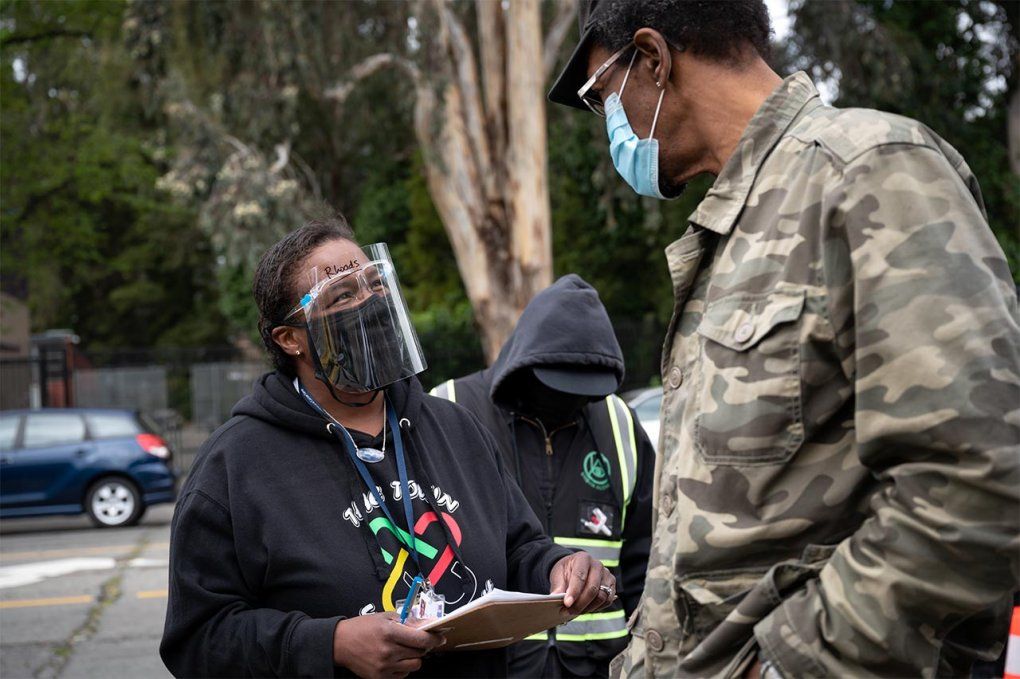 As of late April, about 51% of the folks coming for our vaccines are African American, with the rest split among multiple groups. That’s better than, for example, the pop-ups with FEMA trailers that went to the Black churches – they’re getting about 25%. The Oakland Coliseum, a Deep East Oakland zip code, was 4% African American.

How did you get your numbers so high?

When we saw that the Deep East Oakland census tracts were about half Latino, I said, “OK, to reach African American people we’ve got to go smaller.” That’s how we started doing the pop-ups.

That fall, 57% of people who were tested at our sites were African American. In January, we were well above 70% Black people, which is way over-represented, because they’re only 30% of the population of those census tracts. It speaks to this idea that if you want to engage African Americans, you have to take it to the people.

Now, everybody talks about “the Umoja model” because we showed them who we could reach with testing. The Alameda County Department of Public Health said, “We’re going let you have your own vaccine allocation.” We’re not partnering with a clinic – these are our vaccines. 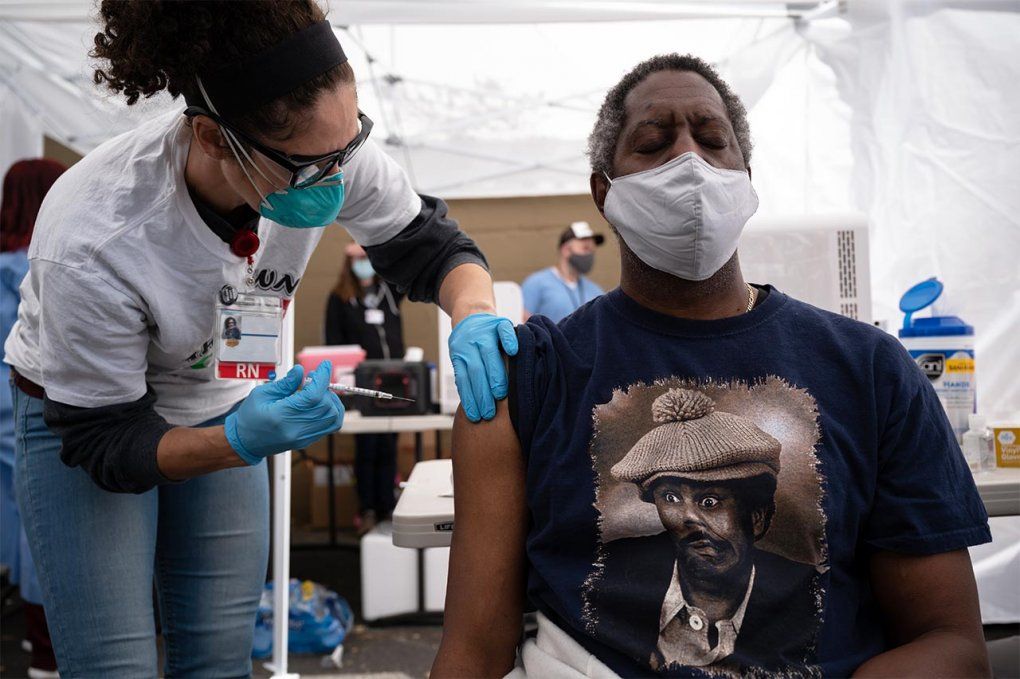 An Oakland resident gets his second shot of the Moderna vaccine from Leah Yacoub Halprin, RN. Photo: Mike Chen

What happens when lots of white people start showing up at your clinics?

Our percentage of Black people, which we’re watching all the time, could be driven down and defeat the purpose of even being Umoja. The county gave us these vaccines because they know we can reach Black people. So I’m finding myself as the gatekeeper.

When white people ask for favors – like when they’re out-of-tier – or clearly only volunteered with us in order to get vaccinated themselves, I give them the shot, but I make sure they understand that Umoja isn’t really meant for them.

It’s hard to do something for Black people. Other people will feel excluded. And yet, that is the experience of being Black in America all the time. And so there’s this piece about privilege and entitlement that needs to bubble into our dialogue when we talk about anti-racist environments, and making UCSF anti-racist, for example. Instead of just talking about disparities and microaggressions, we need to start talking about privilege, because if we can tear that down, there really is no inequity or disparity.